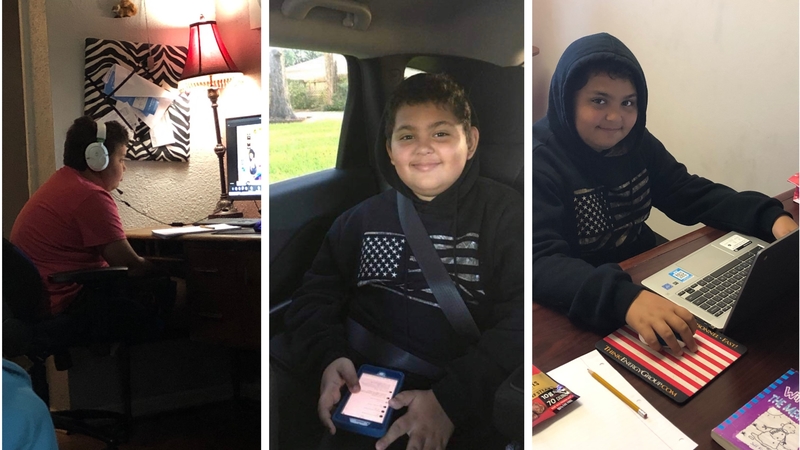 HOUSTON, Texas (KTRK) -- Ayden Linares puts on a pair of white headphones and sits in front of a desktop computer while his mom gets ready for work.

By the time his teacher takes attendance, it's time for the 10-year-old's mom, Alexis Linares, to leave. The Emerson Elementary School fifth grader is going with her.

During the drive to work, Ayden uses his mom's cell phone to stay connected with his teacher and classmates. When school started at the Houston Independent School District last Tuesday, Linares decided to just keep her son's Chromebook at work.

Once they arrive, Ayden sits in an empty office and switches from the cellphone to the laptop for the rest of the school day.

"I'm lucky in the aspect that my job is very flexible," Linares told 13 Investigates. "A lot of parents don't have that luxury, so I'm very fortunate that I'm able to, if he has a question or if I hear, you know, there's a bunch of nonsense going on next door, I can go walk into his 'office.'"

13 Investigates asked parents and teachers to grade the district's first week back at school. Dozens responded, including Linares, who initially gave the district a B+, but said there's still some issues where the district is failing.

"Preparation for this year? C+," Linares said. "The biggest thing is not communicating with parents what was going to go on."

"The district waited a few days before school started to actually get us codes and give us student IDs, so that was really frustrating, not being able to plan," Linares said. "I'm a single working mom, so he's coming to the office, so we really kind of wanted to have a plan in place. They had a lot of time to me. I figured two or three weeks would have been ideal, not two or three days."

We also asked parents and teachers to share what their schools are doing well. Parents said HISD did a great job quickly communicating with them during the technology issues on the first day of school.

One HISD parent, who gave the district an 'A', said teachers are doing a great job helping parents get logged into live meetings and answering questions.

Another parent credited the district for its patience and another said, "Lets speak about the positive, such as the dedication and the computers, the food provided [for] our children this summer. School stopped for our kids, but not for our district. Lets be more positive."

Still, as of Friday, 11,029 students were unenrolled from the district after not logging into virtual learning at all since school started Tuesday, according to the district.

The TEA told 13 Investigates for every student that doesn't show up to class, the HISD could lose an estimated $9,200. If the district doesn't recover those students who were unenrolled when the official count is taken in early December, that could cost the district an economic loss of nearly $101.5 million since, in Texas, school funding is tied to attendance.

Within hours of the first day of school, parents and students were met with an error message and unable to log onto the online learning platform at HISD. One week into classes, teachers and parents say the basic connectivity issues - for the most part - have been resolved.

Still, Coretta Mallet-Fontenot, who has taught at HISD for more than 20 years, said more training is needed for some teachers, especially those who are not as familiar with the systems the district is using this year.

"I definitely think more training for the HUB is definitely needed because we do still have some teachers who, although they're becoming more accustomed to it, they could still use that additional support," said Mallet-Fontenot, who teaches English at Chavez High School.

Now, Mallet-Fontenot said he's experiencing technology issues related to posting assignments online for her students to access and turn in on time. She's also worried about another crash if teachers overload the system in a few weeks when teachers start inputting grades.

"One of my biggest concerns with the HUB is capacity," Mallet-Fontenot said. "It's like driving on a 10-lane highway with, you know, nonstop traffic and everyone is going nowhere fast sometimes. Do we really have the capacity? Because in a couple of weeks we're going to be putting progress report grades together."

Although Linares said she's noticed an improvement in online learning compared to the spring, when districts were forced into remote learning at the onset of the pandemic, her son said "everything" about the first day of school was confusing.

"They didn't put safety regards and kids could just kick the teachers out and each other out and mute each other," Ayden said.

Linares said she's concerned about security settings on the platform her child uses at HISD because she said students are able to go into individual chats instead of paying attention to their teacher.

"When it comes to that, I give them an 'F' because they've had so long to prepare for these kids," Linares said. "It's a very low-income school. They've had plenty of time. I got a call two days before school started as to if my son needed any type of electronic. Two days."

During a school board meeting on Thursday, Interim Superintendent Grenita Lathan said the district still needed 12,000 devices for students who do not have one and thus cannot connect to online learning. It's unclear how many students are still without a device.

"I know one of [my son's] friends, they don't even have a cell phone right now. They don't have electricity. The parents have lost their jobs," Linares said. "[HISD has] the money and the people. They could be going door to door. I just feel like there's a lot more they can do to reach out to people that they knew were already disadvantaged and started this months ago." 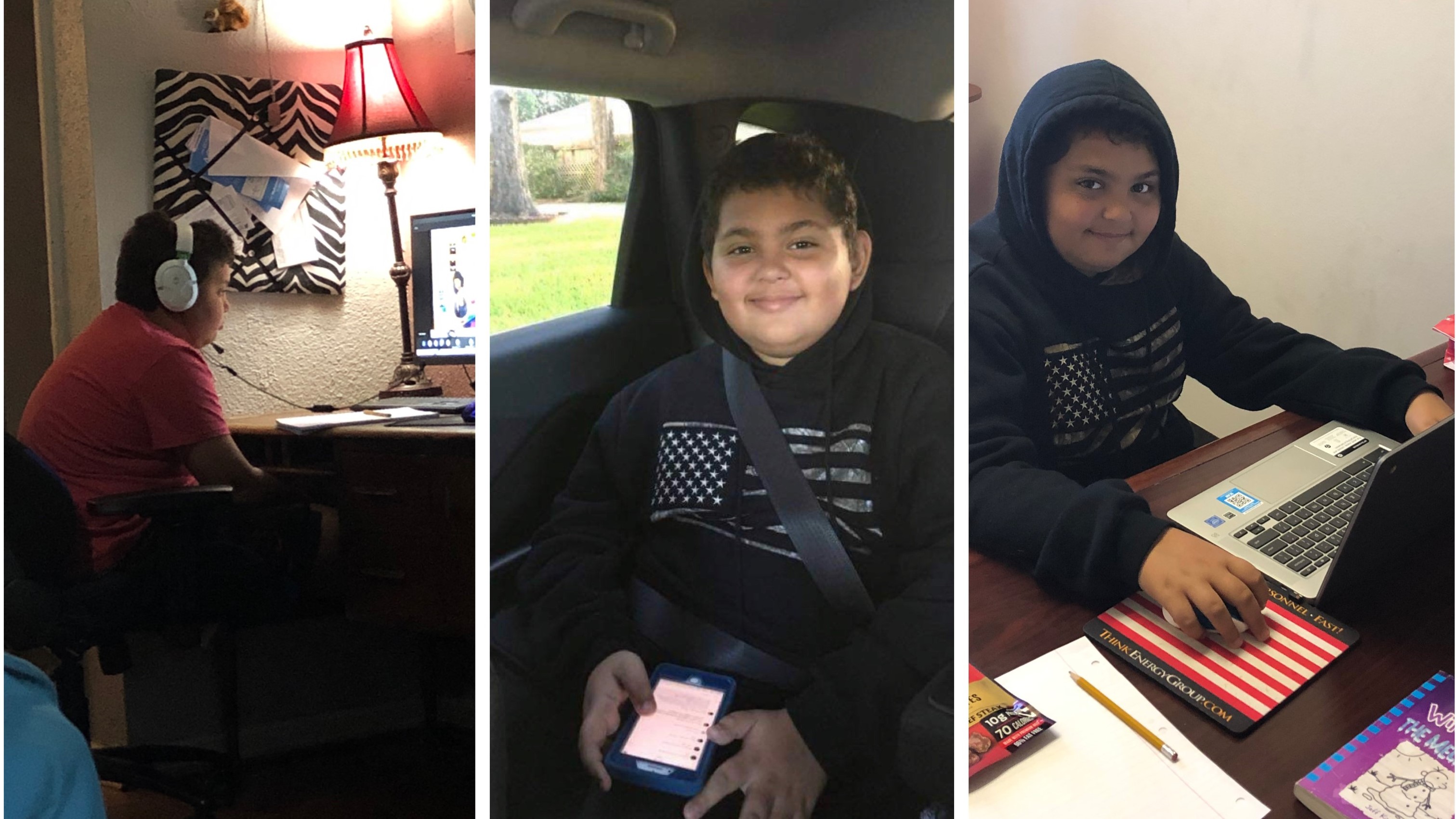 Ayden Linares starts school at home to count for attendance, continues in the car on the way to his mom's office and then signs on to a computer there to finish the school day.

Linares said success this year will depend on the effort the teachers put into their classes. At her school, she thinks the teachers are doing the best they can to try to connect with students, but she said the district is failing them.

"I don't honestly know what HISD did as far as preparing their teachers," Linares said.