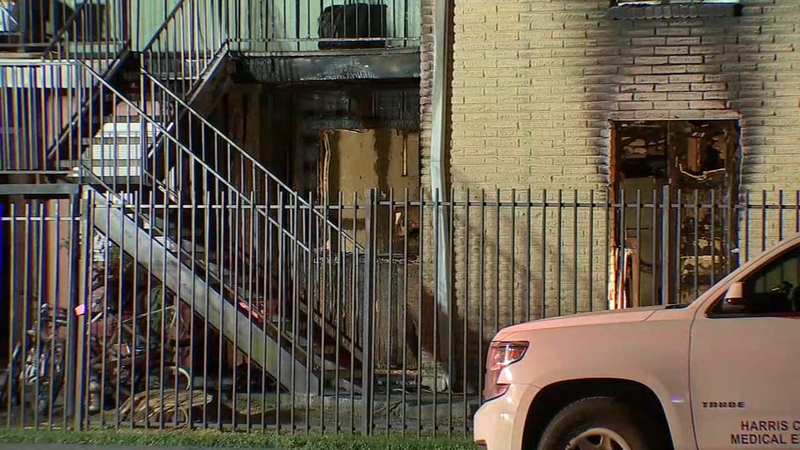 HOUSTON, Texas (KTRK) -- It was a busy night for firefighters across the Houston area. A total of five fires were reported between the hours of 8 p.m. and midnight, and two victims died in Pasadena and Houston.

Houston firefighters responded to a fire before midnight at a home off Holman Street in the Third Ward.

When firefighters got to the home, only a light amount of smoke was coming out of the building.

Firefighters then went inside and found one man and a dog dead from the fire, and a second person in critical condition, officials said.

That surviving victim was taken to Memorial Hermann Hospital with CPR in progress and is said to have extensive burns over 40% of his body.

Firefighters say the loss of life seems odd for the type of fire they encountered.

"It's unusual to see this devastating of a result from what seemed from the outside to be light and insignificant conditions. Even upon investigation, they said they did not have very heavy smoke conditions and very little fire," District Chief Hunter Schappaugh said.

Firefighters said they were able to quickly extinguish the flames.

In Pasadena, firefighters were called to an apartment complex around 9 p.m. Tuesday.

When firefighters got to the scene, they found fire and heavy smoke coming from a first floor unit.

Inside the apartment, they found a man in his 20s who was already dead, fire officials said.

Firefighters said it appeared the man was trying to get out of the apartment, but didn't make it. A dog was also found dead.

Four other units in the complex were affected by smoke and water damage, firefighters said.

In total, 16 units were damaged, firefighters said; 10 with fire damage and 6 with water and smoke.

About 50 to 60 firefighters worked to get the flames under control, officials said.

Fortunately, no injuries were reported.

@HoustonFire is currently on scene of a 2-11 Apartment fire at the 7800 Block of W. Airport Blvd. No injuries reported at the moment. Please avoid the area. @FireChiefofHFD

Houston firefighters responded to an apartment fire on Greens Road around 10 p.m. Tuesday.

Upon arrival, firefighters found fire in the attic of a two-story building.

They made a fast attack and quickly got the flames under control, officials said.

The cause of the fire appears to be electrical, but HFD Arson is continuing to investigate, officials said.

Firefighters responded to a heavy house fire around 10:30 p.m. Tuesday at a one-story, wood-frame house on E. Crosstimbers near Roanoke.

Fortunately, the house was empty and no injuries were reported.

The flames didn't stop overnight. Around 6 a.m. Wednesday, firefighters responded to a large house fire in the city of South Houston.

SkyEye video from above the scene showed heavy flames as firefighters worked to put out the fire.

The house was under construction and no one was home at the time, firefighters said.