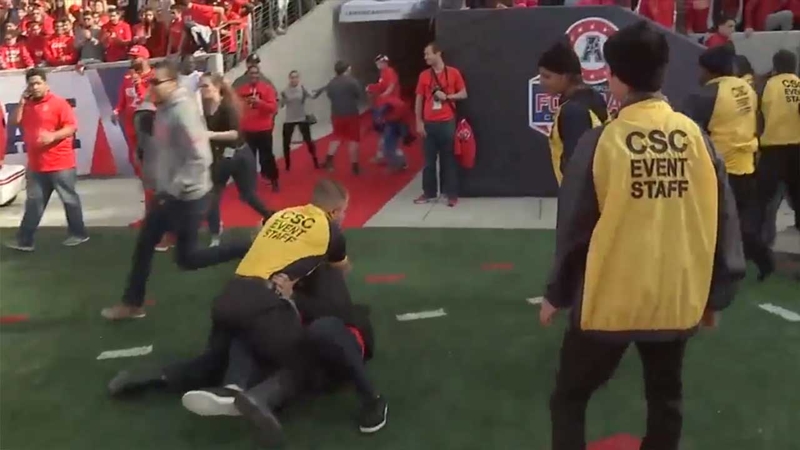 HOUSTON (KTRK) -- For Houston Cougars fans, Saturday's game was a chance to celebrate the Coogs American Athletic Conference championship victory. However, others found themselves tackled on the field at TDECU Stadium.

In a rush to storm the field, many fans are seen on video being attacked by Contemporary Services Corporation (CSC) staff members.

Robert Loredo suffered a busted lip after he allegedly was punched and kicked.

"I'm a really nice guy, I have a big heart, and for that to just happen and be kicked around like a rag-doll that really upset me," Loredo said.

Video's from the post-game melee have gone viral on social media.


Student Harrison Holmes described the chaos that unfolded with one of the guards allegedly being run over.

"He was just kind of lying there," Holmes said. "After that, there was reluctance to go after anybody, the security was."

"I'm really furious that it got to that point to where they had to kick and hit people while they were down," Loredo added. "Tackling that's fine, okay, but to the point where you kick somebody in the face for no apparent reason, that was uncalled for."

University of Houston Vice President for Athletics Hunter Yuracheck called the postgame activity 'disappointing'. In a statement, he said:

"After viewing initial videos of today's postgame activity, I am extremely disappointed and angered with the actions taken by individuals employed by our security contractor CSC. We are working with the University of Houston police to review today's activities and will take swift and appropriate action including the termination of our current contract with CSC and any legal action deemed necessary."

Contemporary Services Corporation (CSC) is aware of the events that occurred following today's University of Houston football game. Training is provided to CSC employees for responding to such situations. Any actions by CSC personnel that contradict our training, CSC's other requirements, or the law, are not condoned by CSC and will not be tolerated. We are currently performing an investigation of the events and will take appropriate action based on the outcome of our investigation.
Related topics:
houstonuniversity of houstonsportscollege football
Copyright © 2022 KTRK-TV. All Rights Reserved.
RELATED
Coogs take down Temple to win AAC title
TOP STORIES
We have a cold and damp night ahead
High school student attacked in his family's driveway in Richmond
Winter blast felt across Texas
Man killed in incident authorities believe stemmed from road rage
Major crash blocks southbound lanes of I-45 in The Woodlands
Alvin votes no on 'sanctuary city for the unborn' ordinance
Opening of adult store in Missouri City on hold after zoning issues
Show More
TxDOT crews prepared as temperatures continue to drop
Burglar caught on camera hitting luxury apartment building
Digging into the process of rebranding Sugar Land Skeeters
Adele postpones Vegas residency due to COVID among crew
Man killed during attempted robbery of woman he met online, HPD says
More TOP STORIES News