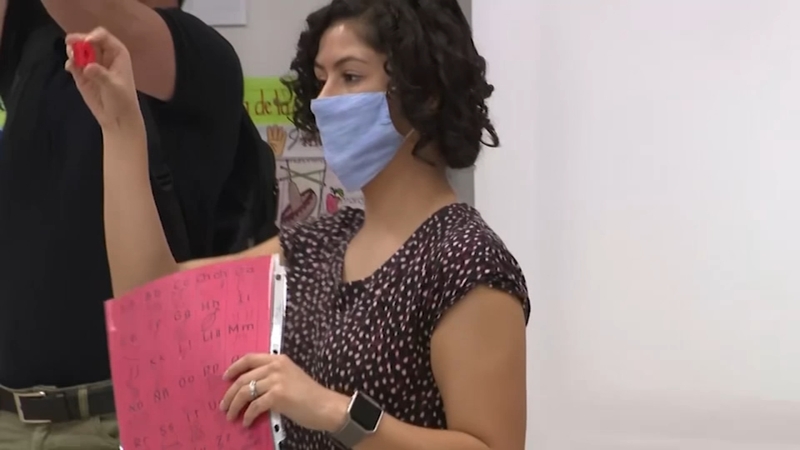 HOUSTON, Texas (KTRK) -- Schools, states and cruise lines are dropping mask mandates in weeks, signaling the end of the pandemic may only be weeks away.

'WORST PART WILL BE OVER'

In December, Houston Chief Medical Officer, Dr. David Persse told ABC13, "I can foresee the end of the pandemic coming, hopefully, within the next month or two."

A month later, we caught up with Persse, who said the steep drop in COVID-19 cases shows promise.

Persse said he doesn't get to declare the pandemic over, since it's a global situation, however, normalcy in our area could be coming soon.

"I think the worst part will be over for us, locally, by March," he said.

Persse said this could change if a new variant emerges. If it does, it could cause a step back.

WHEN WILL PEOPLE BE ABLE TO DROP MASKS?

Despite declining COVID cases, Persse said numbers are still too high to drop masks. In a few weeks, this could change.

"I'm anticipating come rodeo time that amount of viral spread in the community around rodeo time will be very, very low at that time," Persse explained. "If we look at the previous waves, and how they behave in the amount of time, in between them the rodeo period is at a time where the viral activity is comparatively low."

Persse said if you're young, healthy, vaccinated and boosted, you may consider dropping the mask in the near future.

"At some point, I can see where the viral activity in the community, perhaps ours, gets low enough and it's OK for us to shed the masks. But we'll have to be willing to put them back on again should things go back in a bad direction," Persse said.

Persse said people may still choose to wear masks because even if the situation improves, there's a possibility you get infected and could spread to a vulnerable person.

MASK MANDATES WILL END FOR STATES, SCHOOLS AND SOME CRUISE SHIPS IN MARCH

This week, the governors of Connecticut, New Jersey, Oregon, and Delaware announced mask mandates in schools will end in March. California's indoor mask mandate will end on Feb.15 for vaccinated people.

Texas doesn't have a mask mandate in schools, but several districts have implemented them, including Houston ISD. ABC13 asked the district if there are plans to remove the mask mandate.

"HISD's mask mandate remains in place. We are constantly monitoring the data and are going to be guided by the numbers when it comes to the potential relaxations of any of the district's COVID-19 mitigation measures," a spokesperson said.

This week, the Texas American Federation of Teachers held a news conference. We asked its stance on school mask mandates.

"Hopefully, once we start lowering our overall loads we can get to that yellow zone we should be able to lift that mandate and try to move onto something, at least the new normal," Texas AFT, president, Zeph Capo said.

Changes are coming for some cruise passengers on the Disney, Royal Caribbean, and Carnival sail of Galveston.

Each still has a mask policy that hasn't changed. On Tuesday, Norwegian Cruise Line announced it plans to end its mask mandate on March 1.

There are changes on cruise ships, but not planes, yet. TSA's mask mandate for public transportation is set to expire on March 18. When asked if it'll end next month, a spokesperson said no decision has been made.

There aren't changes at hospitals either. Locally, hospitals tightened visitor policies during the omicron surge.

Methodist said no changes are coming yet, and it still has nearly 500 COVID patients in its hospitals.

Persse said if no new variant arrives, we could still see experience waves. "Barring a new variant, what I think will happen is we will continue to have waves, but they will be much less severe," Persse explained. "They will probably last longer, probably a lower amplitude. In other words, fewer cases per day."

It could help us determine what "COVID season" would be like, similar to flu season. Persse said he expects another wave could hit the Houston area this summer, but if there's no new variant, shouldn't be as severe.

As far as when he's going to drop the mask. "That's a great question because I'm not young, although I'm vaccinated and boosted I worry that if I become infected how sick I'm going to get," Persse said.