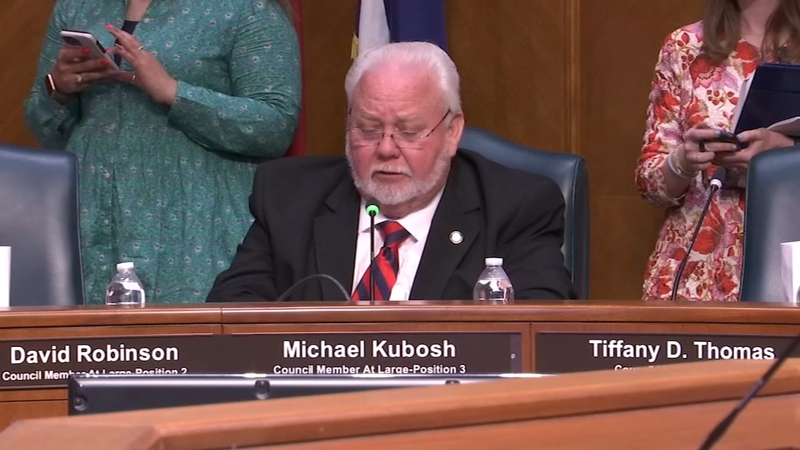 HOUSTON, Texas (KTRK) -- When Mayor Sylvester Turner unveiled the "One Safe Houston" plan earlier this year, it was presented as a comprehensive plan to bring crime down in the city of Houston.

One element of that plan fell into place at city council on Wednesday, as an amendment was passed that's aimed at cracking down on catalytic converter theft.

"Just in the first three months of 2022, HPD has recorded 3,188 thefts of catalytic convertors in the city of Houston," said Turner. "That's 123% increase from the same period in the previous year."

The amendment, to the city of Houston Code of Ordinances, which will go into effect in 45 days, is aimed at making it more difficult for stolen catalytic converters to be sold in the city.

"This is another tool in our toolbox to drive down crime in our city," said Turner.

The change makes it illegal for anyone other than metal recyclers to have possession of a severed catalytic converter without proper identification, such as the VIN and title of the vehicle it was removed from.

It requires metal recyclers, as well as secondhand retailers, to log and report any catalytic converters they receive to the Houston Police Department.

Additionally, any individual or entity caught possessing a cut catalytic converter without documentation will be charged with a Class C misdemeanor per converter.

"There's no question that (the theft) of catalytic converters leads to other violent crimes," explained Turner.

Numbers provided by the city of Houston reported 15 aggravated assaults or robberies tied to catalytic converter thefts in the first three months of 2022.

The other big discussion at city council on Wednesday revolved around increased penalties, as well as requiring a permit, for businesses whose amplified sound can be heard by residents living within 300 feet of the establishment.

"I think these changes represent an important step in improving the quality of life in many Houston neighborhoods," said Alcorn. "Thanks for fighting for your quality of life."

Establishments who use amplified sound detectable outdoors, and are within 300 feet of a residence, will need to purchase a commercial establishment sound permit, which was created as a result of Wednesday's vote.

The permit will go to the business, and not an individual.

The changes to the city's noise ordinance go into effect in 120 days.