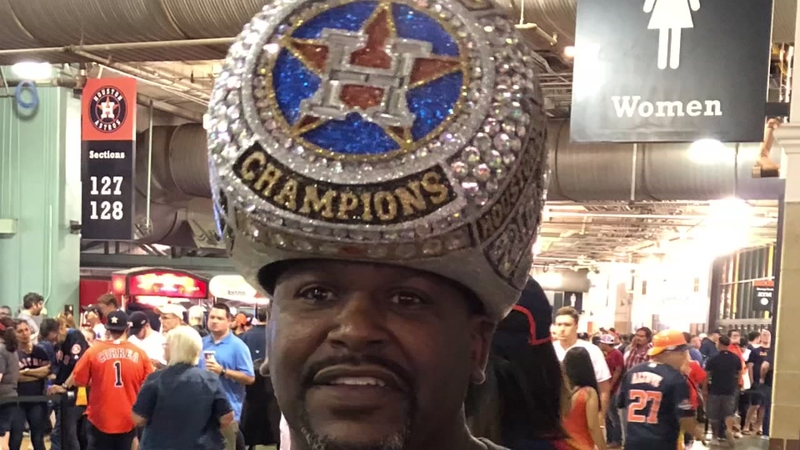 While every ring is a coveted piece of memorabilia, one die-hard Astros fan made sure the one he brought to the ballpark was one of a kind and big enough to fit on his head.

Eyewitness News caught up with Spencer, a Louisiana-native who has been a fan of the 'Stros since childhood.

Spencer stuck out of the crowd for his creative replica championship ring hat, complete with blinged out Astros logo.

Spencer explained the hat was custom-made by a pal Rion Loisel from Championship Ring Hats out of Metairie, Louisiana.

Spencer's fandom of the Astros is pretty big. He told us he remembers riding five hours from Louisiana to see his beloved team play when he was 9.

As for ring night, Spencer hoped to get the replica hat signed. And if the 'Stros repeat this year, he said he might have to get another hat or a championship belt made for the occasion.

However, getting another custom hat made might be a problem.

Rion Loise, who has created hundreds of custom handcrafted ring hats over the years, says he has pretty much retired from the hobby.

"The one you saw the other night, is actually the last one I did," Loisel says about the Astros ring hat. "It's just gotten too hard, too little time, and they just take too much time to make...so we'll see what happens."