Houston vs. New York: Matchup of culture and famous places 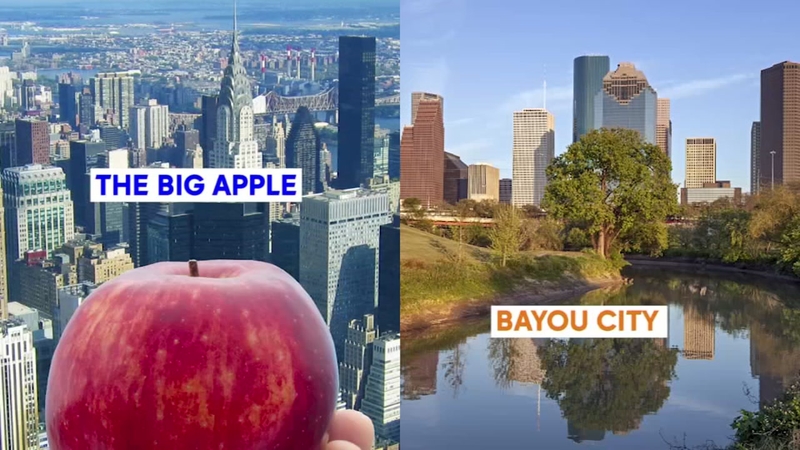 It's the battle of the titans: Houston Astros vs. New York Yankees.

As all eyes are back on both teams, who faced each other in the American League Championship Series in 2017, we're comparing the cities on their best-known attributes, culture and famous places.

The Bayou City vs. The Big Apple
Penned by New York Morning Telegraph sports writer John J. Fitz Gerald, New York's nickname became popular after a classic 1970s tourism campaign. Houston, meantime, has been known as "The Bayou City" since the Civil War, aptly named for the 10 major waterways that run through the city.

But while we both pronounce "New York" the same, we diverge into a war of the tongues when it comes to how to pronounce "Houston." In the south, it's "Hugh-ston." In New York, it's "How-sten."

Eleanor Tinsley Park vs. Times Square
The home of the annual Freedom Over Texas celebration, Eleanor Tinsley Park boasts some of Houston's most premium spaces for outdoor events, including the Bud Light Amphitheater, the Nau Family Pavilion, and trails connecting to the Sabine Promenade. The park makes up just a section of the 160-acre Buffalo Bayou Park.

New Yorkers like to say Times Square is "the Crossroads of the World," where approximately 330,000 people pass through each and every day. Tourists are drawn to the bowtie-shaped town square, which features brightly-lit signs and billboards soaring above myriad shops, restaurants and hotels. Broadway is only steps from Times Square, and is intersected by Seventh Avenue.

Kolaches vs. Knish
In Houston, the kolache is king. Brought to Texas in the 19th century by Czech immigrants, you can find shops offering this meat, cheese or fruit-filled delicacy in many spots across town. But New Yorkers chow down on knish, a Eastern European favorite filled with mashed potato, ground meat, sauerkraut, onions, cheese or sometimes kasha (buckwheat groats).

Barbecue vs. Pizza
Houston is pretty well known for our Mexican restaurants, but barbecue is also king in Houston. Our barbecue style was derived from the butcher shops of German and Czech immigrants and the stylings of cowboys in west Texas, where generous cuts of beef, goat and mutton were flavored by cooking over mesquite wood.

You can find barbecue in New York, but it's in the Kansas City style, which features more pork and lamb and has a strong emphasis on the barbecue sauce itself.

But the real food tradition of The Big Apple is its pizza, which is characterized by its large size and hand-tossed thin crust. Their pies are thick and crisp along the edges, with generous helpings of cheese. To eat this monster, you'll probably have to fold the crust in half.

Pecan Pie vs. Cheesecake
From Houston's Three Brothers Bakery to Goode Company Barbecue to grocery stores and dessert shops across town, the pecan pie is a regional favorite. The pie's delicious filling of nutty pecans and brown sugar or molasses beckons our taste buds every Thanksgiving and Christmas, and is hard to beat.

Cheesecake is a perennial favorite of New York, with its dense, cream cheese base and heavenly graham cracker crust. It's sweet and full of texture, and truly a unique New York dessert. You can find some of the city's best slices at Eileen's in Soho, S&S Cheesecake in the Bronx, and Ferrara Bakery & Café on Grand Street in Little Italy.

Space Center Houston vs. The World Trade Center
Space. The final frontier. In Houston, Space Center Houston and NASA's Johnson Space Center are both testimonials to the city's contributions to science and living laboratories for future advancement. Tourists and leaders in technology alike are drawn here, as are the cameras of Hollywood working to capture the story of space exploration.

In New York, the World Trade Center is a picture of urban renewal as businesses and culture collide with green spaces, incredible architecture, and vibrant, street-level experiences. The WTC connects Tribeca and the Financial District, buzzing with a sense of expectancy while also remembering the city's storied history.

Real Cowboys vs. The Naked Cowboy
While Houston is a city steeped in innovation, we are not apt to forget our roots in western heritage and the toil of cowboys who rode here. The Houston Livestock Show and Rodeo is the world's largest livestock exhibition and rodeo.