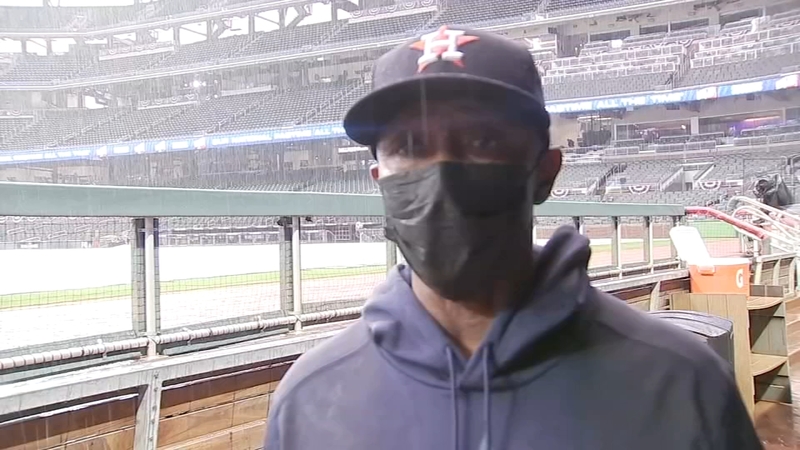 ATLANTA, Georgia (KTRK) -- As the World Series shifted from the friendly confines of Minute Maid Park to Truist Park in Atlanta, the Astros advantage of familiarity - their home field advantage - is gone. There are a few reasons why.

Our ABC13 cameras captured Astros assistant coach Gary Pettis conducting a workout in a downpour Thursday night. The reason? Scouting. A crash course in crannies - and nooks too.

RELATED: What's next for Braves-Astros? Answering the key questions after two games

"In right field, you have padding and screen down below," Pettis meticulously explained. "And then, you have a brick wall on top of it. I just wanted our guys to see where the ball goes and how hard it comes off the brick wall once it hits it. I think the padding here is softer than some places, which is good. You don't get the real hard caroms."

Another Atlanta adjustment for the Astros? Because these games are played under National League rules, pitchers will bat since there's no designated hitter. It was Pettis who helped tutor his team's inexperienced pitchers on how to bunt.

"Just give them the basic technique of how to bunt, and make sure they stay above the ball," Pettis said. "So when it's contacted, it will go towards the ground. Also, get a good pitch. Bunt strikes. We have some who haven't done it as much, but I like what I've seen so far."

SEE ALSO: Mayor Turner could get this in friendly World Series wager with Atlanta mayor

All this adversity: A new stadium, new rules and crummy weather. It might ruffle the feathers of some, but not Gary Pettis. He's dealt with worse.

He missed last year's playoffs and much of this season while battling multiple myeloma, a type of blood cancer.

"It's baseball, man," Pettis pointed out. "This is what I love doing, and I'm glad and happy to be here. I don't really concern myself with what I'm going through, because it's a team effort right now. It's about what we're doing through. We're in the 2021 World Series, and hopefully we can win."

Gary Pettis is back home doing what he loves, regardless of the adversity that comes with being on the road.