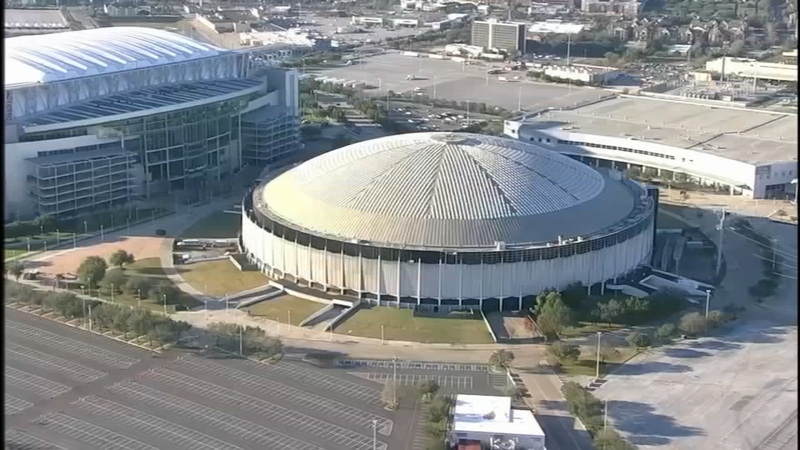 Could the future of the Astrodome be decided by you?

HOUSTON, Texas -- After the past few most recent attempts to revive the Houston Astrodome failed to launch, officials are moving forward with a new effort to once again turn the vacant structure into something useful for Houston residents. This time, officials will be seeking input from the public first.

The Astrodome Conservancy-a private nonprofit formed in 2016 with the goal of redeveloping the dome-is planning to embark on a public engagement campaign in mid-April to solicit feedback on what the dome should become, Executive Director Beth Wiedower Jackson said.

"This is in an opportunity to think holistically-how can we be smarter, greener [and] more creative around the reuse and redevelopment of the Astrodome," she said.

The conservancy is not a branch of Harris County government, but the group does have an agreement with the Harris County Sports and Convention Corp. to work on the future development of the Astrodome, Wiedower Jackson said.

A separate $105 million plan to renovate the Astrodome championed by former Harris County Judge Ed Emmett fell by the wayside after Lina Hidalgo took over as county judge in 2019. Hidalgo has since raised questions about the use of taxpayer dollars on a plan that did not involve public input. Prior to Emmett's plan, a different plan to repurpose the Astrodome into a multipurpose events center was rejected by county voters in 2013.

Wiedower Jackson said the conservancy has worked closely with Hidalgo and other Harris County commissioners on how to proceed with a new potential revitalization effort.

"What we learned during that process was that, to date, the plans for the Astrodome put forth have been created kind of around the kitchen table," she said. "There has yet to be an opportunity for the general public in Harris County-the taxpayers who own that structure-to have a say or have their opinions voiced through a process. We felt very strongly that that needs to be part of any development plan going forward."

The conservancy raised about $90,000 in private donations in 2020, which helped it bring the consulting and engineering firm Huitt-Zollars on board to craft the public engagement process, Wiedower Jackson said.

She said details about the campaign are still being finalized, but it would be wide reaching and multilingual, and it would run for a six- to eight-week period. People will be able to submit feedback through online surveys, but the campaign will also involve virtual opinion sessions, the dates of which are to be announced.

Although the conservancy is in the beginning stages of developing a plan, Wiedower Jackson said some constraints have been identified that are intended to keep the cost of the project in check and to take contractual obligations into account.

"There are some wonderful pie-in-the-sky ideas, but they are not possible because of the limitations on the Astrodome," Wiedower Jackson said. "We have done our due diligence in collecting and analyzing what those parameters are so that when we open this up to the pubic, we can craft specific questions, [and] we'll be able to get some real concrete information from the public that will actually be useful to guiding the future development of the Astrodome."

In addition to the public engagement campaign, Wiedower Jackson said the Astrodome Conservancy also completed a financing study and is raising private funds to complete a market assessment that could start before the end of the year. Following the public engagement campaign, she said the conservancy will spend two to three months turning the feedback into a vision for the Astrodome that can eventually be presented to commissioners.

SEE RELATED: A look at the '8th wonder' then and now

This content was provided by our partners at Community Impact Newspaper.
Report a correction or typo
Related topics:
societyhoustonmetrohoustoncommunity impact newspaperastrodomecampaigndonationsnonprofit
ASTRODOME
'No Layups' podcast asks, 'What will happen to the Astrodome?'
Astrodome's future could be decided by you
A look back at the first Astros game played in the Astrodome
Astros super fan creates 'egg-cellent' tribute to Astrodome
TOP STORIES
Procession to be held today for fallen HPD senior officer
Who killed this 19-year-old woman in Dickinson?
Gov. Abbott to sign anti-smuggling bill in Rio Grande Valley
Driver rescued from overturned big rig on North Loop at I-45
Front brings winds, cooler start to the day
Houston girl goes viral after accusing mom of being an alien
10-year-old boy hit by vehicle in Atascocita, deputies say
Show More
Biden to double US global donation of COVID-19 vaccine shots
Packers' star says chain with dad's ashes lost in endzone was found
Officials: Many Haitian migrants are being released in US
Housing director fired after alleging mayor is 'bankrolling' developer
Houston entrepreneur identified as man killed Westpark Tollway
More TOP STORIES News