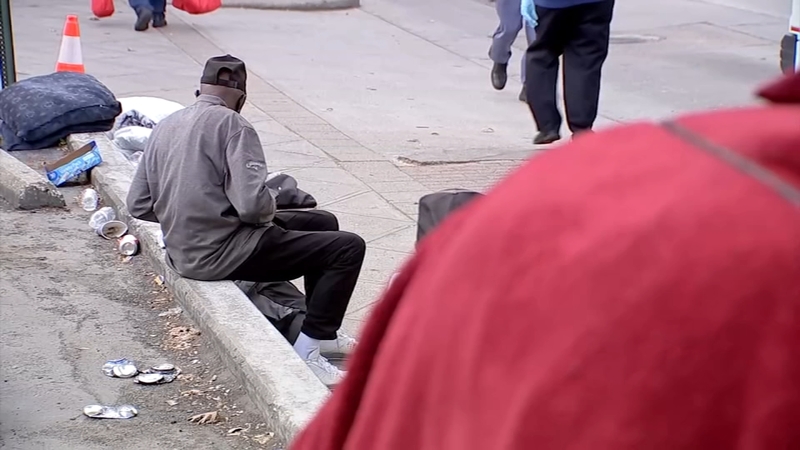 HARRIS COUNTY, Texas (KTRK) -- When Jason Cavitt started feeling hopeless again, his family said the 40-year-old thought the best way to get help for his addiction and mental health struggles was to get arrested again.

"He said the police give you an option of going to jail or taking you to a facility where you can get some help," his father Leon Cavitt Jr. told 13 Investigates.

Cavitt was sober for more than six months when he slipped up and started doing drugs again.

The family ruled out a purposeful arrest and took him to an emergency room for treatment last December. After he was discharged, his family couldn't locate him and he was living on the streets again.

RELATED: Family warns ignoring homeless could lead to 'another body in the morgue'

Cavitt had been homeless on and off for his entire adult life and died Jan. 15, 2020.

He's one of 106 homeless deaths in Harris County so far this year. Countywide, homeless deaths are up nearly 50 percent since 2017 and it's on pace to increase again for the third year in a row.

Wayne Young, CEO of The Harris Center for Mental Health and IDD (Intellectual and Developmental Disability), said there are better, more lasting ways to get mental health resources than getting arrested.

"That's the last thing we want for them," he said. "It's not a therapeutic environment. It's not intended for that purpose."

Young said nearly 90,000 people are treated by their clinics every year. The center also runs a program that diverts low-level offenders into treatment as opposed to jail time.

The pre-charge diversion center opened in September 2018, Young said. Over the last two years it has diverted 3,065 people away from jail and into treatment.

"Instead of going to jail for a low-level charge that wasn't a public safety risk, they came to us for treatment and help," Young said. "These are people who many of them are homeless, about 60 to 70% of them are homeless. They have serious mental health issues, often co-occurring substance use disorders and the charges that they're picked up on are things like trespassing."

The program saves money on expensive jail stays and prosecutions. It has been so successful that a new, larger facility is set to open next month to help homeless individuals amid the pandemic.

Both the City of Houston and and Harris County Commissioner's Court are investing $5 million each into the new COVID-19 Homeless Respite and Rehabilitation Center that will be operated by The Harris Center.

"(It'll be) primarily focused on those individuals that are homeless, involved in the criminal justice system and have serious mental health issues," Young said. "Jail diversion will relocate to that location, but we will also offer a jail re-entry program for people who are leaving the Harris County jail, who are homeless."

Diversion isn't the only option, but Young said sometimes finding the right resource can be difficult for homeless individuals who might not be as organized, and can't just pick up the phone and call for help.

'There's very little that you get at the diversion center that you couldn't get everywhere else," Young said. "It's just not always in one place. It's not always on demand."

Leonard Kincaid, executive director at the Houston Recovery Center, said something he's working with the jail to overcome is making sure offenders are connected with addiction and mental health resources after they leave jail so their treatment and road to recovery can continue. Oftentimes, he said, once someone is discharged from jail, the treatment services end.

"People can get into jail and they can get really quality care, whether it's mental health or whether it's addiction, but once they leave, quite often they're going to need to continue their recovery care and those resources have to be made available to them in the community," Kincaid said. "Quite often, at discharge, those connections are not made."

Ultimately, the criminal justice system isn't set up to be a treatment center.

Kincaid said there are much safer ways to get help, but at the same time, there is a shortage of services. Sometimes, he said, they will have to keep someone at their sobering center for extended periods of time because there isn't room at other facilities to get help.

"There is a huge deficit in resources for getting these people into care," he said. "One of the things that's so important (is to) keep a person who has an addiction issue engaged in pursuing recovery and the ability to respond to them in a timely manner."

If you or your loved one needs help with mental health or addiction, call The Harris Center's 24-hour Crisis Line at 713 970-7000.

Cavitt's family encourages anyone with a family member who is struggling with homelessness, mental health or drug and alcohol addiction not to give up on them.

"Don't turn them away, even if they do come to your house and they're all drugged out. Take them in, get them cleaned up. Look into getting them help," Cavitt's sister Katrena Curtis said. "Don't just push them out of the door like, 'Oh you can't stay here, you got to go,' because I guarantee you when you get that knock at your door (that they died), you're going to regret it."