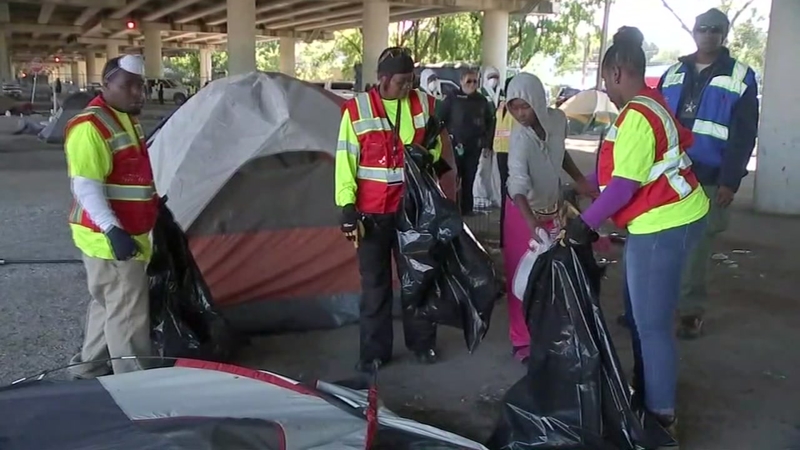 HOUSTON, Texas (KTRK) -- Houston Mayor Sylvester Turner has ordered the cleanup of the Midtown homeless encampment on Wheeler at Caroline that's plagued the city for years.

A METRO Houston bus was brought in on Friday morning to carry dozens of homeless away from the area. The city says they will all be given the opportunity to go to shelters with the help of The Way Home Coalition, but only a handful of people appeared to be taking the city up on that offer.

A @METROHouston bus is at the Wheeler encampment to take the 45 or so residents to shelter as we continue our compassionate work to provide services and roofs to those experiencing homelessness. The Way Home has cut the region's homeless population by 51% in recent years.

Mayor Turner cites crime and predators, along with filth, pests and health hazards, as reasons behind the move.

More: Those camping under the Wheeler overpass near Midtown have become targets of crime and predators — amid human waste, insects, rodents. After residents voluntarily accept offers of shelter today, the property will be fenced and converted to a bus parking lot. #homelessness

"The population of the Wheeler encampment under a freeway overpass near Midtown dwindled recently to about 45 people but has continued to attract predators seeking to victimize its very vulnerable population," Mayor Turner said. "Today, the city and its compassionate partners are taking extra steps to place homeless people in shelter beds with their consent and eliminate hazards created by the property's use as an unofficial outdoor living space."

The property beneath the freeway overpass will be fenced off and converted into a bus parking lot.

On Tuesday, the city placed notices at the encampment informing residents that the area would no longer be available for their use. In addition to transportation to shelters, the city provided storage for many of the residents' belongings.

BIG DEVELOPMENT - The city of Houston shuts down long time homeless encampment. The problem has plagued Midtown for years. Mayor @SylvesterTurner says the homeless are being given the opportunity to go to shelters. I’ve only seen a handful actually do so. https://t.co/5i3bYUJFM2