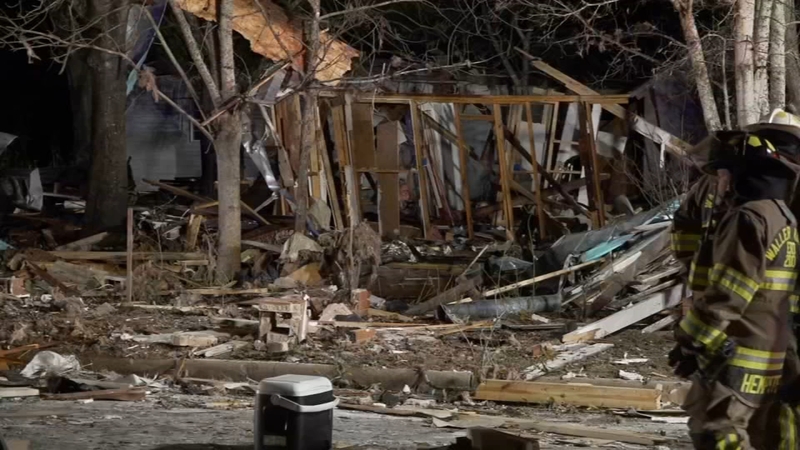 HEMPSTEAD, Texas (KTRK) -- Investigators say one person was burned in a home explosion in Hempstead overnight.

Just before 10:30 p.m. Thursday, investigators got calls for an explosion on 5th Street near St. Barbe.

Video from the area shows the damage done by the blast, with debris scattered throughout the street.

When firefighters first arrived, multiple buildings were on fire. They were able to extinguish the flames quickly.

"There's fire, there's civilians that are running up toward it," one firefighter could be heard saying on Range Cast scanner. "We need more people here to help with control."

The Waller County Fire Marshal's Office says a man went to the house to pick up some clothes and when he opened the door, the home exploded. Investigators say he doesn't live at the home.

One person is badly burned after a house explosion in Hempstead. They were taken by helicopter to a Houston hospital... not sure how they’re doing. The Waller Co Fire Marshall’s office is still investigating the cause. Live throughout the morning on Eyewitness News. @abc13houston pic.twitter.com/cZmgJkffNm

The man reportedly has severe burns on his face, chest and arms. He was taken by Life Flight to a Houston hospital.

Investigators say EMS treated a couple others at the scene, mainly for anxiety.

"My uncle's house blew up. I got here and found out how it looked," Luis Saucedo said. "My uncle lives there, my grandma lives behind this, my parents live nearby. My friend called me and said a house on St. Barbe blew up."

"Right now, it's early in the investigation," Dean Hensley with Waller County Fire Marshal's Office said. "We're measuring debris, taking photos, talking to witnesses. It will take us a while."

Authorities at the scene were working to clean up the debris.

The cause of the blast is under investigation.