Check your change! Some coins could be worth thousands of dollars 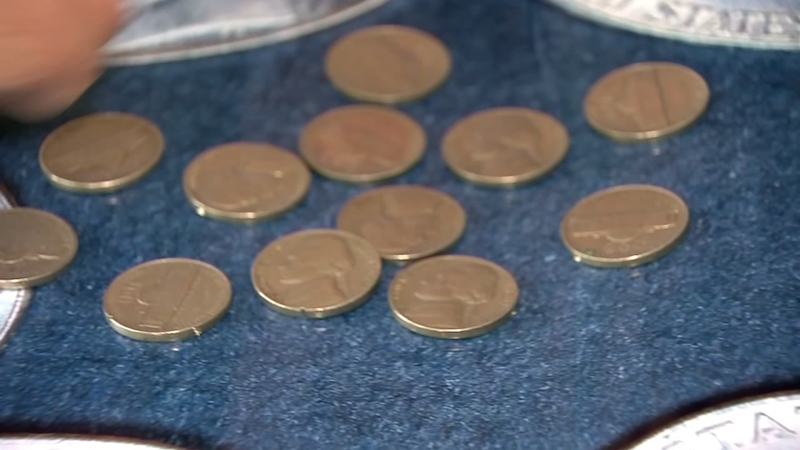 HOUSTON (KTRK) -- Starting Sunday, if you're out and about doing some holiday shopping, you should pay a little more attention to the change you receive. Specially marked coins are being dropped into circulation, and if you find one, it could be worth thousands.

Carl Schwenker with the Greater Houston Coin Club says, "A lot of people are just using credit cards all the time. On the smaller transactions, you're going to get change. Watch your change."

Schwenker, along with coin club members are upping the ante this year, on Jefferson nickels.

If you find one of their specially marked coins, you could turn into $3,200.

But there are other valuable coins to watch out for as well. Schwenker says to be on the lookout for the 1914 D Penny. That's a couple thousand dollars itself.

"You also have coins that look like they've been hit twice," he says.

The're also known as double-die coins. A good example is the 1955 penny. Looking closely, you can see a double image of the date. It's value could be a few hundred dollars.

So while you're looking out for these coins, the odds are in your favor this week for those specially marked nickels, labeled 1 through 100.

Schwenker tells us, "The markings will be right above the dome on the reverse side of the nickel."

Coin club members will be dropping these marked nickels into circulation Sunday and Monday. If you find one, bring it to the George R. Brown Convention Center next week during the Houston Money Show starting next Thursday.

According to Schwenker, "the first 5 people will get $200. The next people will get $100. Then what we're going to do is take you to a random number generator on a computer. And if you press the button, and it comes up with the number on the coin, you'll win $3,000."

If your number doesn't match on the first try, you'll receive a second chance for $250. Still no luck? A third shot could score you $100.

Schwenker says they're trying to make this treasure hunt fun, and want to emphasize that you have to watch your change.

What to do if you find a specially marked nickel

The first five individuals to come to the George R. Brown Convention Center (the Houston Money Show hall) will received a $200.00 reward. After the first 5, the reward will be $100.00. (Individuals that find the coins will be encouraged to call a special contest telephone number (832-372-5771) to confirm that the coin is one of the engraved "Lucky Nickels" and arrange for an appointment the early the next day.) The coins will be theirs to keep and their entry to the show is free.

You can learn more about the special coins on HoustonCoinClub.org or HoustonCoinShow.org.