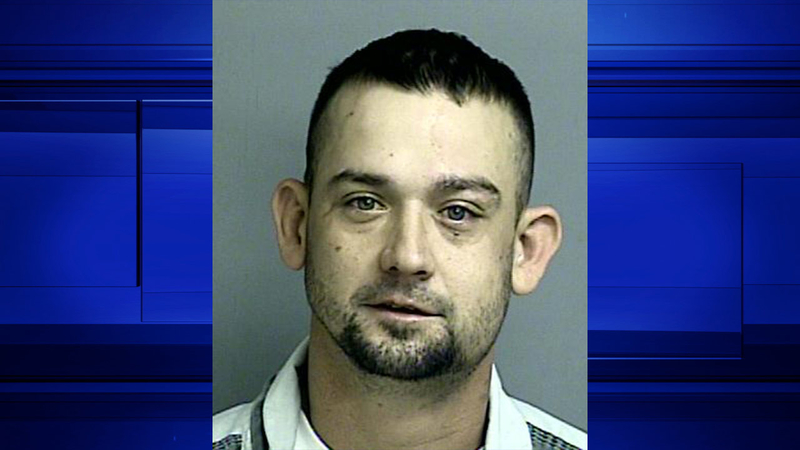 NEW CANEY, TX (KTRK) -- A driver is now in jail in Montgomery County accused of running over and killing a man who survived a shooting at Lone Star College.

"I can't believe this happened. I'm so sorry." That's what sources say 31-year-old Joel Gilmore said when he turned himself in to police.

Eyewitness News spoke by phone with a family member who took Gilmore to surrender.

"He's pretty tore up about it. His head's been in his hands every since it happened. He's taking it pretty hard," the family member said.

Gilmore described to his family what happened Friday night.

"There was cars coming to him with their headlights on bright. He said the cars passed and next thing you know, he said he seen the red cherry of a cigarette. He slammed on the break, but it was too late," the family member said.

Family member says Gilmore did stop. But he panicked and didn't know what to do, and he didn't want to go back to jail.

Gilmore's record shows several priors, from evading police to assault, dating back to 2003.

Family members say Gilmore had cleaned up his act and was doing well.

Neal was on the right track, too. He was bouncing back from being shot 6 times during the Long Star College shooting in 2013. His family members say they have some closure now that they know who killed their loved one.

Gilmore bonded out of jail Wednesday night. His family is sending their condolences to Neal's family, who's planning to lay the 28-year-old to rest on Tuesday.

Related topics:
new caney
Copyright © 2021 KTRK-TV. All Rights Reserved.
RELATED
Man killed in hit-and-run was a college shooting survivor
Search underway for driver in deadly hit and run
TOP STORIES
Arrest made in case of Alvin abduction, sexual assault of a minor
20-year-old shot to death during break-in of Conroe home, police say
Man accused of dismembering mom's body after murder appears in court
Houston Astros on pace for record beer year
Astros Game 6 guide: Closures around Minute Maid Park back on tonight
JJ Watt on Texans: 'It hurts me to see where' fan base is now
Don't get stuck in these traffic closures this weekend
Show More
Warrant: Baldwin didn't know weapon contained live round
Prop guns: What they are and how they can kill
4 teens accused of luring victim to his death in SE Houston
SkyEye13 captures video of Bay City funeral home destroyed in fire
Peter Scolari, 'Bosom Buddies' and 'Newhart' star, dies at 66
More TOP STORIES News