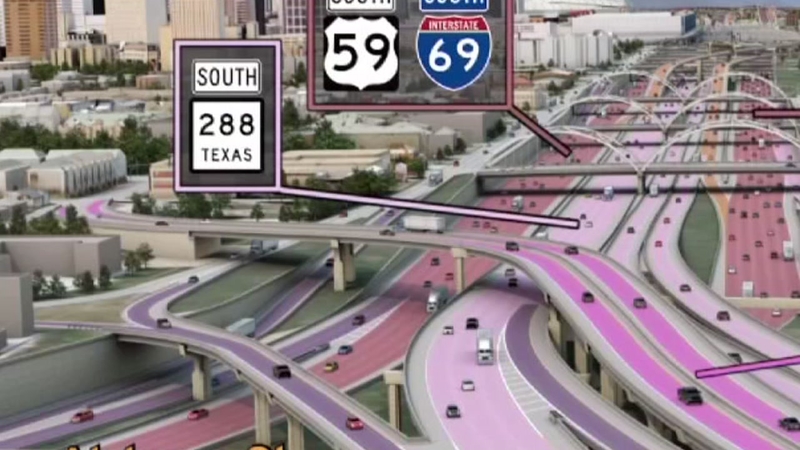 HOUSTON, Texas (KTRK) -- If you drive along State Highway 288, you know construction is well underway for the Toll Lane Expansion Project. TXDoT recently released new construction plans that will impact the 288 managed lanes, as well as a popular Houston neighborhood.

The recent 3-D renderings of the North Houston Highway Improvement Project released by TxDOT show a completely redesigned freeway system. But for some Midtown residents, one of the SH-288 managed lane exits drops right in their neighborhood.

Thomas Wang said he, like many Midtown residents, moved there for the walkability, which could be hindered by excessive traffic.
"The east side of Midtown is 98 percent residential. You're talking residential streets that people walk on, so you are creating all this traffic in one small spot," Wang said.

That small spot is right at Chenevert near Stewart -- that's where TxDOT plans to build an on and off ramp to the 288 managed lanes as part of their North Houston Highway Improvement Project.

"What we're trying to do is change things and try to alleviate some of the weaving for safety issues and traffic problems that are impacting these communities, and we are definitely looking at ways to improve traffic flow, and for the toll lanes, this will improve traffic along 288," explained Danny Perez with TxDOT.

Perez projects 19,000 vehicles per day will travel inbound and 15,000 vehicles per day outbound on the 288 managed lane extension connectors to and from Chenevert. This will alleviate the 288 main lane traffic, but resident Jim Honey said it won't help Midtown.
"What are we? A neighborhood or part of the freeway?" asked Honey. "The noise and fatalities. They talk about making these places more walkable. How are you going to make this more walkable with 2,200 cars per hour here, 40 per minute?"

"They have enough space to put this on ramp on the feeder ramp, and as a matter of fact, I think that's where it belongs," said Wang.

As for TxDOT, Perez said to remember there are other exit options.
"The Chenevert exit will be one option, for instance. But you can also stay on the main lanes of 288 to 59, 69, but you can also exit north. There are multiple options. It's not going to spill all the traffic all to that area of midtown," Perez explained.

The North Houston Highway Improvement Project and TxDOT will continue to take comments until June 27 on their website.