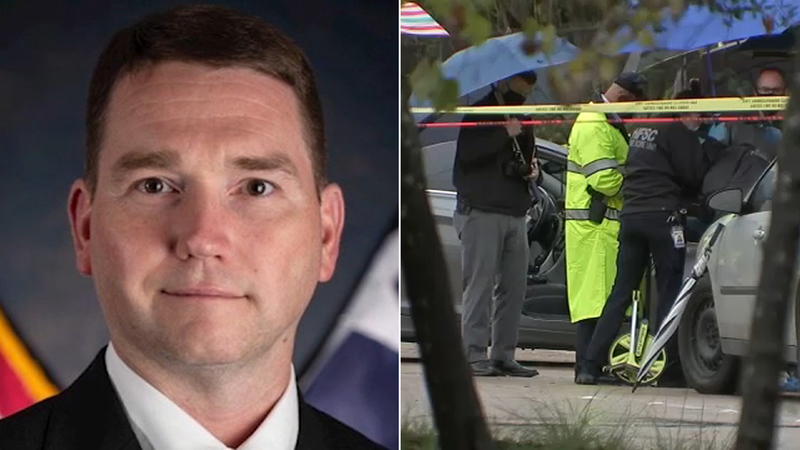 HOUSTON, Texas (KTRK) -- UPDATE: On Monday, ABC13 learned more details about Joshua Delacerda, the 30-year-old man suspected of killing Lemuel Bruce and then killing himself. Delacerda was a June 2020 graduate of Texas Southern University's Thurgood Marshall School of Law. His family told attorney Cordt Akers that Delacerda was weeks away from starting a job as a human rights lawyer for the state of Washington. ABC13 has not independently verified that.

We knew Friday that Delacerda had no criminal record. Monday afternoon, his family tells attorney Akers that they remain as surprised as everyone else by what transpired on Friday morning. They are searching for answers as well.

Akers says police told the family no one else in the family was being investigated.

Lemuel "DJ" Bruce was one of six Houston Fire Department arson investigators serving surveillance in a Heights area neighborhood early Friday morning before he was shot and killed while following the suspected gunman, sources close to the investigation told ABC13.

On Friday, Houston police confirmed the identity of the shooting suspect as 30-year-old Joshua Delacerda.

Houston police served a warrant at Delacerda's home where they collected some undisclosed evidence.

According to a background check, Delacerda had no prior criminal history and was once employed in the Texas Comptroller's Office.

Delacerda was also a recent graduate of Texas Southern's Thurgood Marshall School of Law, receiving his degree back in June, his attorney told Eyewitness News.

One man was shot and killed in the incident that wounded the investigator. ABC13's Courtney Fischer was on the scene this morning as investigators processed the scene.

According to ABC13 sources, the six arson investigators were in the Timbergrove area of The Heights, but they weren't looking for a suspect in particular and none of them was expecting to make a traffic stop in the neighborhood.

While the group's primary objective was to surveil the area, the investigators had knowledge of a silver/grey car.

According to sources, Bruce spotted a vehicle matching the description and proceeded to follow it. During the tailing of the car, Bruce, who was armed, radioed for a second arson investigator for help.

But his colleague arrived to Bruce's location, where Bruce was found in his vehicle with multiple gunshot wounds to his upper torso and head, sources said.

The suspect's vehicle was spotted a block away by the second arson investigator, where the suspect was found dead.

Bruce was rushed from the scene to Memorial Hermann Hospital, where he died.

Officials said the suspect died of a self-inflicted gunshot wound.

The sources added arson investigators have access to bullet-proof vests, though, it's also not known if Bruce wore one.

In addition, arson investigators would typically need to call Houston police for assistance if they have to make a traffic stop or arrest.

The shooting came in the midst of widespread arson-set fires throughout the neighborhood. Authorities have not yet officially linked the suspected gunman in the confrontation to those fires.

HFD Station 62 is located near the scene and personnel there heard the shots fired, Fire Chief Samuel Pena said. Firefighters were able to respond within two minutes.

"We mourn the line-of-duty loss of Lemuel Bruce, our friend and brother. Please keep Lemuel's family, friends and arson unit in your thoughts and prayers. Investigator Bruce leaves behind a loving family, including his wife, daughter and son, along with many friends and a long list of Houston firefighters who respected and enjoyed serving with him," said HPFFA President Patrick M. "Marty" Lancton.

Lancton said details of a memorial service for Bruce will be announced as soon as possible. The tragedy marks the fourth person in the department to die since July, though, the previous three deaths were due to the coronavirus.

Bruce is also the first arson investigator in HFD's history to die in the line of duty.


RELATED: What we know about HFD arson investigator killed in line of duty

The arson investigator was looking into a string of recent arsons when some kind of confrontation turned into a shootout. One person is dead and the investigator is in the hospital

Praying for all of our teammates at HFD. May God who knows your needs comfort and lift you. Amen 🙏🏼