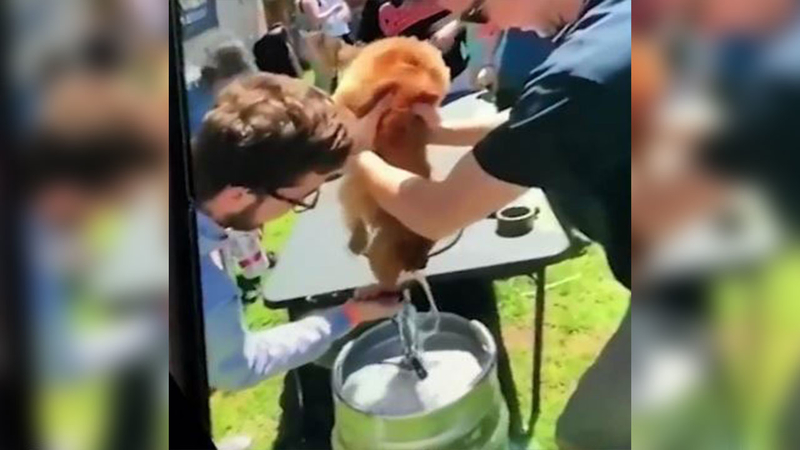 LONG ISLAND, New York -- A fraternity at a New York university has been placed on suspension after a video surfaced on social media showing young men at a fraternity house party forcing a puppy to drink beer from a keg Saturday.

The Nassau County Society for the Prevention of Cruelty to Animals said one of the men in the video is the owner of the 10-month-old puppy, a Cavalier King Charles Spaniel, and is a member of the fraternity.

The other man in the video with the dog has not been identified.

"The behavior seen on the video is unacceptable and in violation of the University's Code of Community Standards," said Hofstra University spokeswoman Karla Schuster. "The University has been in communication with Alpha Epsilon Pi International headquarters, as well as with chapter members regarding this off-campus incident."

The video shows a man picking up the squirming dog, while the other puts the keg nozzle in or near the dog's mouth as beer comes out of the keg.

The SPCA said it's unclear which man in the video is the owner.

The Nassau SPCA said it is investigating the incident.

"That dog had no choice," said a Nassau SPCA detective. "It didn't say, 'Hey I want a beer and I want it poured down my throat,' so, it's wrong. We're going to gather all the evidence, and once we have all the evidence, we'll sit down with the district attorney's office and see how we're going to proceed from there."

The detective said the owner could face a misdemeanor charge of torturing of animals.

The SPCA has ordered the owner to take the dog to a veterinarian Monday to have blood tests and other exams performed.

He said the dog appears in good health and is well-cared for.

A spokesperson for Alpha Epsilon Pi said the chapter at the university has been placed on "cease and desist" due to suspected violations of the organization's health and safety policies.

"We hope that we are able to use this as a teaching moment to help build better young men who are committed to our policies and our mission of developing future leaders of the world's Jewish communities," fraternity spokesman Jon Pierce said.

Alpha Epsilon Pi is a Jewish college fraternity with chapters on more than 190 college campuses in seven countries.

Hofstra officials are not saying whether the owner of the dog or any other students will be disciplined.

"Any individual students identified in the video will also be subject to the University's Code of Community Standards," Schuster said.

A neighbor said the party was out of control, and has had to call the police before because of the loud parties.