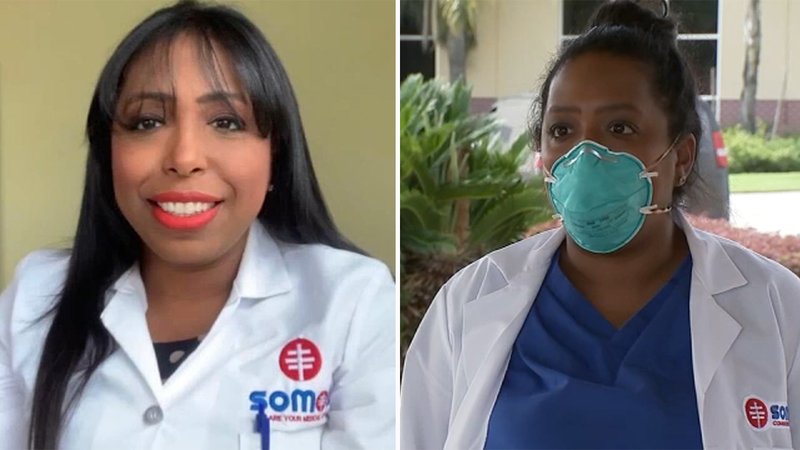 NY doctor without day off since March comes to Houston

HOUSTON, Texas (KTRK) -- A doctor who has not had full day off since mid-March is part of a team of health care workers from New York who is now here in Houston "paying it forward."

"Because many of you came to New York to help us out when we really needed it," said Dr. Yomaris Pena, an internal medicine physician who lives in New York City. "We are brothers and sisters, independent of color, skin, status and socio-economic background. We have to help each other."

Pena is the coordinator at a new testing site at Fallbrook Church in northwest Houston where more than 300 people were tested Thursday. Friday, a second site opens at Higher Dimension Church in southwest Houston. Together, they will test as many as 1,000 people a day for two weeks. The sites are provided by Governor Andrew Cuomo and the State of New York.

"The governor wants to make sure we're out here supporting those cities and states who came to help us in our time of need," said Michael A. Kopy, Director of Emergency Management for the State of New York.

Two new #COVID19 testing sites are open in Houston, courtesy of @NYGov At 10-you’ll meet the doctor who is coordinating one site. @YomarisPena hasn’t had a full day off since mid-March #abc13 pic.twitter.com/WrIWBDm4vY

In total, 20 doctors, nurses and support staff from New York have traveled to Houston.

Dr. Pena works with SOMOS, an immigrant-led network of doctors that partnered with the State of New York to open bilingual sites. In Houston, they aimed to set up at churches in hard-hit minority communities.

The state of New York has sent two teams of COVID-19 testing staff to Houston. Over the next two weeks, the two teams are expected to conduct 10,000 COVID-19 tests, with all supplies donated from New York.

"The demand for testing has exceeded our capacity. So, to be able to get additional help where we can, open up additional sites is a big, big plus," said Mayor Sylvester Turner.

Dr. Pena has been separated from her family for months and has had one half day off since mid-March, which she spent on an empty beach to recharge. Still, she did not hesitate when she was asked to come to Houston. She calls it her duty and honor.