13 Investigates: How many students have measles vaccination at your child's school?

KTRK
By Ted Oberg and Sarah Rafique
HOUSTON (KTRK) -- Juliana Graves' heart began failing the moment she was born. Four weeks premature, Juliana wasn't even considered full term when she received a heart transplant when she was 17 days old.

"This wonderful family had a tragic story and out of their tragedy, they decided to give back to the world, and they donated their child's organs," said Juliana's mom, Riki Graves. "Ever since she got her heart, she kind of perked up and she's done really well."

Juliana, now 5 years old, still takes medicine every day to keep her healthy. Her immune system is also too weak to receive live vaccines, including the one used to prevent measles. Instead, Graves said her daughter must rely on people around her who have received the vaccine and can prevent the spread of disease - something that became especially important when Juliana started kindergarten last month. 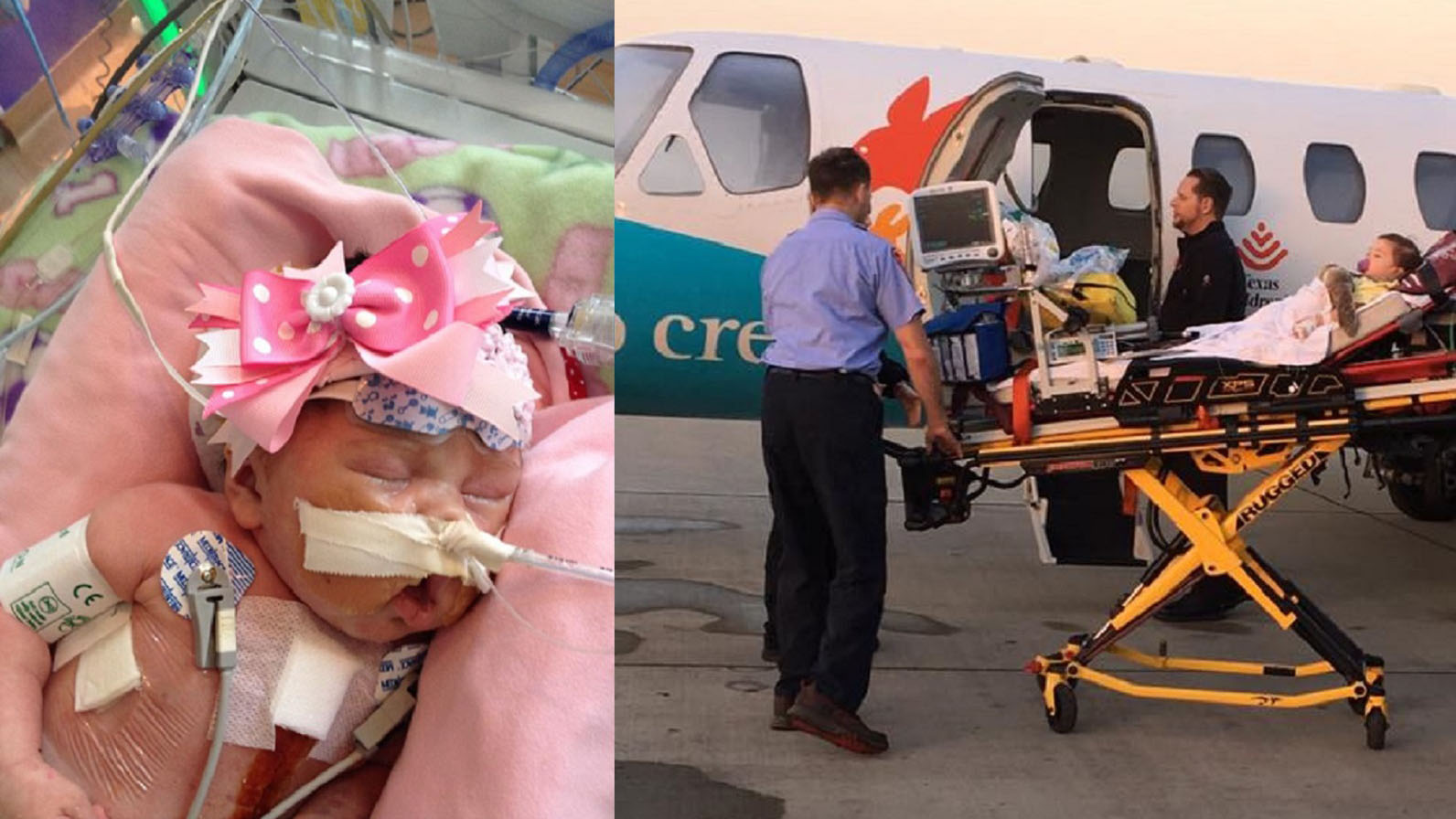 Juliana had a heart transplant in 2014. She was later flown for treatment after serious infections. Given her transplant, she can't receive the measles vaccine. (Riki Graves)

Doctors suggest when 95 percent of a population is vaccinated, it's enough to develop what's called "herd immunity," a vaccination rate high enough to protect the larger school population. But getting detailed information to determine which elementary school Juliana should attend was difficult for the Graves family.

"It's still very concerning for us because we do know that there are kids that are unvaccinated that go to her school, but we don't know for sure if they're in her class or not," Graves told 13 Investigates. "I can't prevent her going to the grocery store or going to school. Those are things she's just going to do as a child so I do have to rely on other people to vaccinate."

The State of Texas only releases vaccination rates at the school district level. In districts with hundreds of schools and hundreds of thousands of students, like Houston, not having campus-level information makes it difficult for parents to know the percentage of students vaccinated at their child's school.

And for Juliana, that lack of information at her smaller school district, could still be life-threatening.

Attempts to mandate campus-level data be available for parents in Texas failed during the last two legislative sessions, despite warnings from public health officials.

"In Texas, school districts are required to give their school district immunization rates and not individual schools," said Dr. Umair Shah, executive director of Harris County Public Health. "You may assume that a certain independent school district has a rate that looks pretty good - 98 percent, 99 percent - but you may have pockets of schools that will have vaccine rates that are markedly lower than that, and you may be dropping off your child to school and not be aware ... Parents don't have that information, and teachers don't either."

13 Investigates teamed up with ABC journalists at some of the biggest cities in the U.S., including New York, Los Angeles, Chicago, Philadelphia and San Francisco, to analyze local measles vaccination rates and found schools in the Houston area and nationwide are below the recommended vaccination rate.

In partnership with ABC stations across the U.S., 13 Investigates mapped measles vaccine rates at hundreds of schools making it easy for you to find out what's happening where your child spends their day. Explore the interactive below to learn the immunization rate at your child's school or district.The red dots indicate schools with vaccination rates less than 95 percent.
On mobile device? Click here for a full screen experience.


Through open records laws, 13 Investigates obtained measles vaccination rates per campus for Houston, Conroe and Cypress-Fairbanks independent school districts. Katy ISD sent data that was not compatible for analysis with those districts. Fort Bend ISD did not respond to requests for information.

Measles data in Texas is collected based on the vaccination status of kindergarten and seventh-graders. In Houston ISD alone, more than 50 campuses had measles vaccination rates less than 95 percent last year, based on the data. Las Americas Middle School has the lowest rate, with only 26 percent of seventh-graders vaccinated for measles during the 2018-2019 school year.

Dr. Jeffrey Starke, a pediatric infectious disease specialist at Texas Children's Hospital, said he remembers a child in Houston in the 1980s who had leukemia. The child was in remission but contracted measles, developed pneumonia and, despite thorough treatment, died.

Starke has treated dozens of measles cases throughout his 40-year career, including one within the last five years. He said doctors can try to control symptoms, but ultimately the patient will suffer because there is still no treatment and no medication that is effective against the measles virus.

"Measles is the most contagious of all of the childhood diseases, by far," Starke said. "It's like a heat seeking missile and it finds the people who are not properly immunized and protected and that's how people get sick."
EMBED More News Videos

Dr. Jeffrey Starke, a pediatric infectious disease specialist at Texas Children's Hospital, has treated dozens of measles cases, including one within the last five years.

Measles causes flu-like symptoms of illness, fever and congestion, but it's the only infection that causes a rash that starts on the hairline and spreads down the body, causing red spots that become larger and more joined together. It also can cause white dots on the cheeks of your mouth, potential seizures or even brain damage years after the infection occurs.

"Of the childhood illnesses, especially the ones we prevent, measles feels the worst, is the worst and has the highest rate of complications," Starke said. "This is not a simple, simple disease and it's the reason why it was one of the very first diseases to be targeted for immunization in the first place. Little kids can have (up to a 105 degree) fever for days."

Harris County hadn't had a measles case since 2015, but this year there's already been four cases. Two of the patients were younger than four years old.

Those numbers concern health care professions, especially since in 2000, the U.S. eliminated measles, meaning there was no continuous disease transmission for 12 months or more. The influx of cases this year mean the nation's "measles-free" status is at risk. Public health officials warn that if a case occurs in October that designation will be stripped.

"Here we are 19 years later and it's almost like we pulled our foot off the pedal," Shah said. "As the Harris County health authority, confirming four cases of measles earlier this spring that is, to me, the concern, it's the tipping point."

To prevent measles, doctors recommend two doses of the measles vaccine; the first dose is 93 percent effective and the second dose bumps the effectiveness to 97 percent.

In Texas, school-aged children are required to receive two doses, with the first one happening sometime on or after their first birthday.

But, parents can refuse to vaccinate their children due to medical reasons, such as a cancer patient or organ recipient whose immune system is too weak for vaccines. Parents can also request an exemption for "reasons of conscience," such as religious belief. 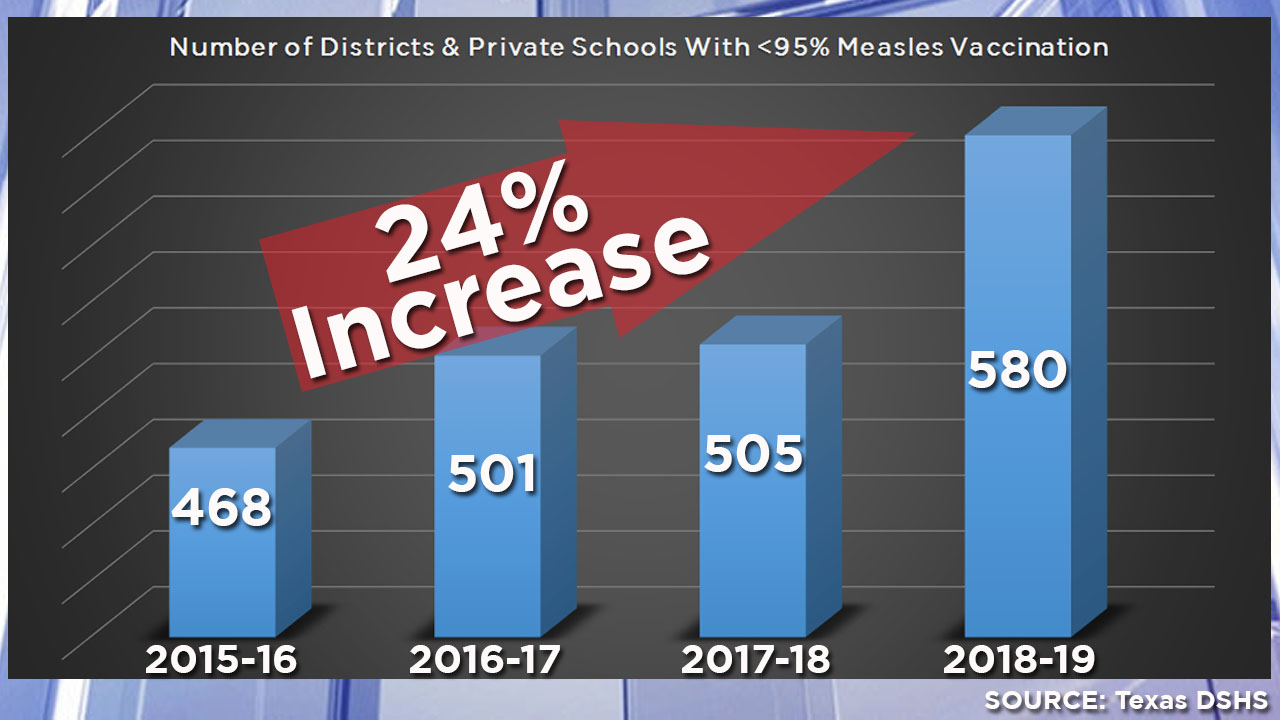 The number of conscientious exemptions has been increasing over the last 15 years in Texas. During the 2004-2005 school year, there were less than 3,000 children who opted out of at least one vaccine, according to the Immunization Partnership. That number continues to rise each year with more than 64,000 vaccine exemptions this past school year.

Starke said parents of measles patients who aren't vaccinated or aren't old enough for the second vaccine often have a sense of regret.

Dozens of manilla folders are neatly stacked on top of one another on the floor of Ana Zangeneh's office, each one a case file for someone who has contracted an infectious disease.
As an epidemiologist with Harris County Public Health, Zangeneh's job is to track down as much information as possible after a patient is diagnosed with measles.

Because it's one of the most contagious infectious diseases, Zangeneh said they reach out to anyone who could have been potentially exposed. For the four confirmed measles cases so far this year in Harris County, she said that meant reaching out to more than 400 people total.

Zangeneh said if a measles patient went to a hospital, then an emergency room and then visited a clinic, they will contact all three facilities and contact all the patients who were in the same waiting room or patient's room as the infected person up to two hours after the patient left. Measles can live in the environment for two hours after an infected person leaves the area.

Epidemiologists will also work into the weekend and 24/7 if needed, making multiple calls to reach as many people exposed to the disease as possible.

"We let them know that they were possibly exposed, for them to watch out for symptoms. We ask if they're immunized," she said. "It's a scary phone call to receive."

Zangeneh said she asks the patient about their travel and vaccine history. Measles is contagious four days before symptoms appear and four days afterwards. It can also survive in an airspace two hours after someone leaves a room.

"You could technically infect someone before you know you have the illness," Zangeneh said.

"It's kind of a nightmare," Starke said. "It's one of those, stop everything else you're doing and take care of this for the next week, and usually that's how long it takes to go everything because it's so contagious and at hospitals we have so many vulnerable people, we simply can't take a chance on someone developing full blown measles if we can help it."

This past spring, Juliana sat in her mother's lap in front of a packed room at the Texas Capitol. When a lawmaker asked her mom a question about why she's there, the little girl buried her head into her hands and laid her head on the table.

"Parents should not have to go through this bureaucracy in order to get data that is already collected," Graves said told lawmakers in April, as she spoke in support of a bill that would provide transparency regarding vaccination rates at schools across Texas.

Nearly two dozen people came out against the bill at the Capitol. The measure never made it for a vote.

Now every school year, Graves said she'll monitor her child's school to make sure the percent of students vaccinated for measles and other diseases doesn't drop below 95 percent.

"For me to know that information, it's really important. If her school drops below 95 percent, I have to pull her and find somewhere else for her to go," Graves said. "It's very detrimental to her health. Some of those diseases are life-threatening to Juliana."
Related topics:
health & fitnesshoustonhealthted oberg investigatesschools
Copyright © 2021 KTRK-TV. All Rights Reserved.
TED OBERG INVESTIGATES