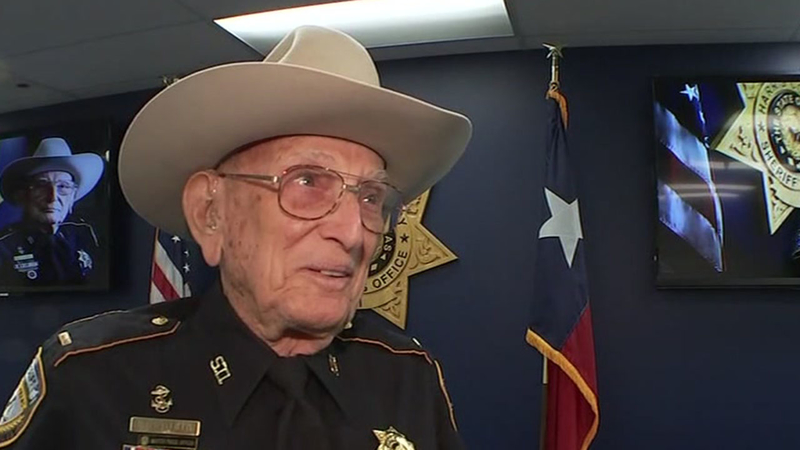 HOUSTON (KTRK) -- The oldest known certified peace officer in the state works for the Harris County Sheriff's Office, according to the agency.

Lt. Tom Morgan turned 96 last week. He became a reserve deputy when he was 71.

He helps the sheriff's office where he's needed. He works crowd control when big events are in town. He also helps patrol the Houston Ship Channel on boats provided by the U.S. Department of Homeland Security.

It's not just honorary-- it's real work. Morgan said he has to keep up with the training requirements.

"My doctor threw a fit when I told him I got a taser, because to get a taser you have get teased," he said. "At 96, I don't really try to get into fistfights anymore. But I can if I have to."

Morgan served as a Marine during World War II and said he had many brushes with disaster. He described getting malaria near Greece and off the coast of Japan, his ship was hit by a kamikaze.

"We lost a lot of people too. A lot of friends killed. I don't know why I wasn't," he said.

He hasn't taken his long life as license to slow down. His wife passed away a few years ago. Now, he's dating Ann Bates, a woman he met at a community center in Humble. She's teaching him Polka dancing.

"I try to get him to slow down!" Bates said.

"He's the epitome of what you want. He's still wearing the uniform after all these years," Hickman said.

Inspiring fellow officers is something Morgan never set out to do, but he said he has no plans to stop any time soon.