5-year-old dies after being critically injured in suspected drunk driving crash in east Houston on Jan. 20 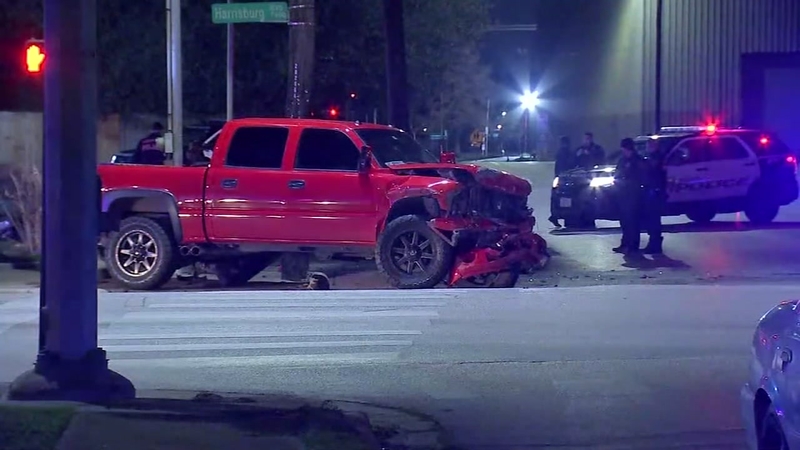 HOUSTON, Texas (KTRK) -- A 5-year-old girl who was critically injured in a suspected drunk driving crash on Jan. 20 has died.

According to the District Attorney's office, the child died Saturday morning.

Kimberly Saucedo, 24, and her 5-year-old niece were inside the vehicle at the time. A 15-year-old boy, who was also inside, and the driver were able to make it out. Saucedo was severely injured and is recovering.

The driver, 35-year-old Isreal Suarez Lugo, has been charged with intoxication assault and intoxication manslaughter. Investigators believe Lugo was intoxicated, based on witness statements and field sobriety tests.

He says he noticed a red truck with a female passenger inside driving erratically near Harrisburg and 75th.

"He drove around the vehicle and tried to run the red light and hit the vehicle," said Colchado. Seconds later, he says he saw the truck crash into a black Cadillac carrying four people.

The head of the Harris County District Attorney's Vehicular Crime Division says Lugo had been drinking at the Time Out #1 bar on Fuqua before the crash.

"We're going to find out if in fact he was there, and if not, where he was. We're going to find out who was serving him and if someone overserved him. This is not a minor issue, but it is an over-service issue from the evidence we've seen so far," said Sean Teare of the Harris County District Attorney's Office.

"We are going to obtain everything they have. We've been told they have surveillance footage and detailed receipts from that night," said Teare.

In the meantime, the family is focused on the recovery of Saucedo.

Her fiance told us he has not left her side since the accident.
Report a correction or typo
Related topics:
houstoncar crashhospitaldrunk drivingtruck crash
Copyright © 2022 KTRK-TV. All Rights Reserved.
TOP STORIES
Fallen HCSO Sgt. to be honored with procession to funeral home
Alleged K9 stabbing suspect charged with father's murder
No bond granted for suspect in Pct. 5 corporal ambush killing
Cool temps through the weekend with a warm-up next week
Bodies found in back seat and trunk of burning vehicle in Liberty Co.
Attorney of man questioned in dad's death wants him to seek help
Houston greenlights plan to help homeless find housing
Show More
EPA announces cleanup plans to address Fifth Ward cancer cluster
Investigation underway in pregnant woman shooting
Search underway for suspect in Texas City double shooting
You could get paid to get your COVID vaccine or booster
2 Aldine ISD students lose $1K for college when FFA turkeys killed
More TOP STORIES News