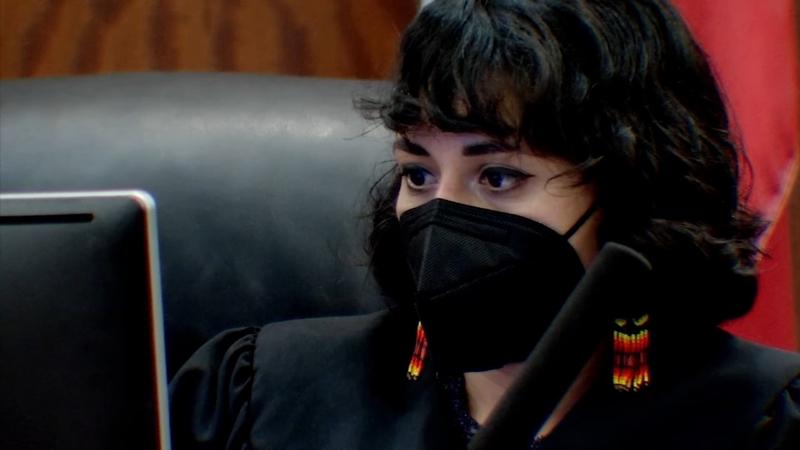 HARRIS COUNTY, Texas (KTRK) -- A judge has recused herself from the criminal case involving three of Judge Lina Hidalgo's senior staffers, who are accused of steering a nearly $11 million COVID-19 vaccine outreach contract to a small Houston-based firm.

Judge Natalia Cornelio of the 351st Criminal Court filed her recusal on Tuesday.

"As the judge presiding over this matter, I remain able to base any decisions in this matter on the facts as they develop, and I remain able to render a fair and impartial judgment," the document signed by Cornelio said. "Nonetheless, so that the state of Texas, the Defendant, and the public will maintain trust in the judiciary, and to avoid any appearance of impropriety, I sua sponte recuse myself."

Each one of them was indicted on one count of misuse of official information and one count of tampering with a government record.

Cornelio and Nader both worked at the Texas Civil Rights Project in 2018. In 2019 and 2020, Cornelio worked for Harris County Commissioner Rodney Ellis, where she would have had frequent contact with Hidalgo's senior staffers.

Hidalgo endorsed Cornelio during her 2020 campaign for district court judge, where she was elected to her current position. Elevate Strategies' Founder Felicity Pereyra donated $100 to Cornelio's campaign in September 2020.

In a statement, the Harris County District Attorney's Office spokesperson, Dane Schiller said "given the judge's close relationship to at least one of the defendants, a recusal is appropriate; our work continues."

ABC13 spoke to the administrative judge Wednesday afternoon who said the recusal is not going to delay the overall process and that soon a new judge will be randomly assigned to the case.

In the days following the investigation, Hidalgo has said that she is standing by her staff.

"I've made my feelings known about this investigation, which has already dragged on for months. Various news reports have shown that it's proceeding with what it is, at best, a serious misunderstanding of the facts. I'm very confident that, when the facts are known, my team will be cleared," Hidalgo said in a statement last week. "I do not, and I will not, cave to bullying or political dirty tricks. I have not seen anything to suggest that my staff did anything but work tirelessly for the people of Harris County. They will remain on my team."

An indictment is not a finding of guilt, just that a grand jury, comprised of county residents, found there was enough evidence to pursue criminal charges against an individual.

Search warrants made public last month indicate the Harris County District Attorney's Office and Texas Rangers were investigating whether Triantaphyllis, Dunn and Nader communicated with Elevate Strategies' founder Felicity Pereyra about possible work for the county before a bid for the vaccine outreach work was made public to other potential vendors.

An additional warrant made public sought to search and seize documents from the Google customer accounts for Triantaphyllis, Dunn and Nader, as well as Hidalgo, her communications director Rafael Lemaitre and Kathryn Kase, who serves as counsel for the county judge's office.

Investigators have not alleged or accused Hidalgo, Lemaitre, or Kase of misuse of official information.