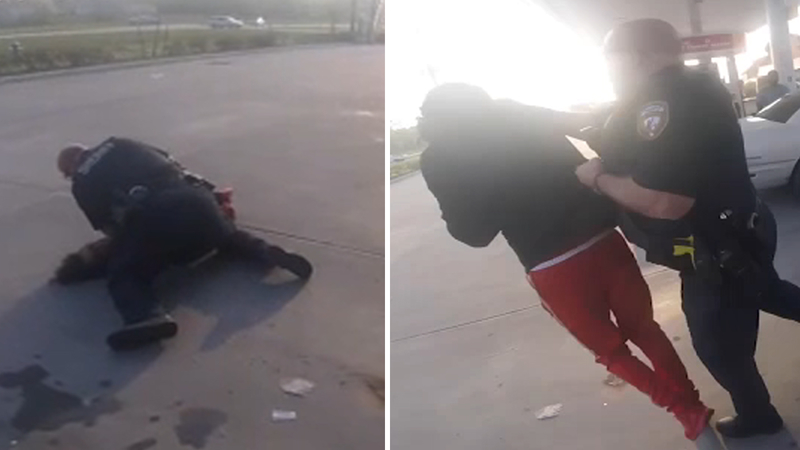 Deputy under investigation after video shows him punching teen

HOUSTON, Texas (KTRK) -- Two men are no longer deputies with the Harris County Sheriff's Office following their involvement in two high-profile and separate encounters, including one that saw a teenager being punched.

The sheriff's office announced on Friday the terminations of Eric Sanchez and Bert Dillow after each deputy underwent a review of the department's Administrative Discipline Committee. Sanchez was fired on April 8, while Dillow was let go on April 28.

Evidence from both cases is under review with the Harris County District Attorney's Office to determine whether criminal charges are appropriate.

Eyewitness News reported on each deputy's encounters, which were similarly captured on video.

ABC13 was the first to bring you Carlos Rodriguez's March 26 encounter with Dillow.

Editor's note: The April 1, 2021, story on this incident can be seen in the video above.

Carlos, a high school sophomore living in northwest Harris County, was riding his ATV with two other friends through their neighborhood. The teenager has a GoPro camera mounted on the back of his ATV, which captured the entire ride and the shocking incident.

As the teens approached their neighborhood gas station to fuel up, they saw a Harris County Sheriff's deputy, who has a frequent presence at that location.

The video shows the deputy, with a drink in his hand, walk out of the Shell gas station and approach Carlos. He then puts his drink down on the teenager's ATV and asks to see his license.

"He just looked at my ID for like two seconds and said to put my hands behind my back," the teen told ABC13. "That's when I panicked a little and pulled away from him and he grabbed me."

As the deputy grabbed the teen, he is heard screaming and cursing on video.

"Don't run from me boy, I will beat your (expletive) right here," said the deputy, who is significantly larger than Carlos. "Turn around and put your hands behind your back before I beat the (expletive) out of you. Don't be (expletive) stupid!"

ABC13 obtained video showing the moments leading up to and after a Harris County deputy punched a teen out for a joyride on an ATV.

The deputy is then seen on video punching the teenager in the face and putting him on the ground. He is then handcuffed and marched to the deputy's patrol vehicle.

Earlier this month, Carlos' family called on the sheriff's office to fire Dillow, who was placed on administrative desk duty shortly after the incident.

In their findings, the sheriff's panel "determined policies regarding the following activities were violated: Conduct Prohibited, De-Escalation and Response to Resistance (Use of Force), and Reports."

Eyewitness News also uncovered Dillow, who had been with HCSO since September 2018, was under investigation after a man's in-custody death while he was with the Baytown Police Department.

A man is asking, was it necessary for a deputy to draw his gun? In the video, he explains the ordeal he faced when he encountered a Harris County deputy who stopped him in the middle of a funeral procession.

In February, ABC13 brought you video captured by George Dickerson and his co-worker who said they had a gun pulled on him during a stop by Sanchez.

Dickerson said he and his work partner merged onto the South Loop from US-59 on Feb. 28, and got caught in a funeral procession.

"I really just wanted to get in front of that car, so I did that," Dickerson recalled. "The cop in the front slowed down, so I couldn't go around. Then, the other one came around and I was like 'What? What's going on?' He was like 'Stop.'"

Dickerson told ABC13 that before he could stop, the deputy in front of him slammed on the brakes, so he did the same, as well as the deputy behind him.

"He went around the truck, stopped and parked in front of us," Dickerson said. "I'm in the left lane in the middle of the freeway and he gets off his bike with his gun drawn and comes at me and as soon as I see his gun drawn I put my hands in the air and said, 'I don't want any trouble.'"

Dickerson's co-worker, riding in the passenger seat, captured what happened next on video. The video shows the deputy with a gun in his hand and the driver with his hands up.

The deputy, later identified as Sanchez, can be heard saying "I'll (expletive) kill you."

The sheriff's panel found Sanchez, who had been with HCSO since August 2016, "determined policies regarding the following activities were violated: Conduct Prohibited, Performance of Duty, Use and Discharge of Firearms, Body-Worn Cameras, Traffic Enforcement, and Traffic Citations."