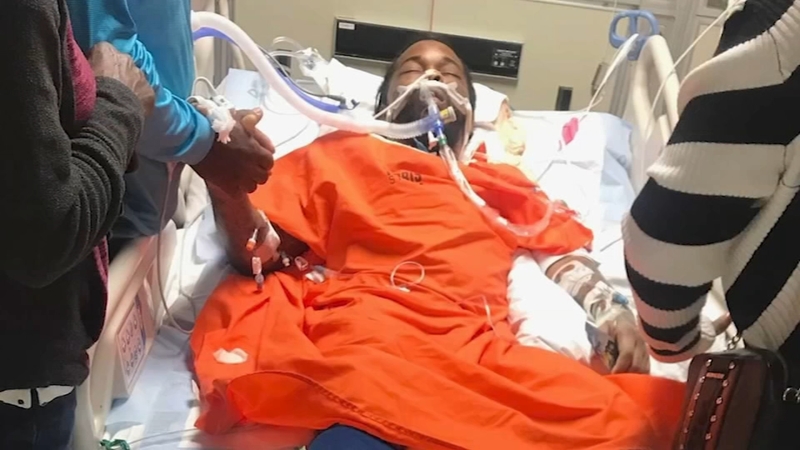 HARRIS COUNTY, Texas (KTRK) -- The mother of a Harris County inmate, who is now on life support, wants to know what happened and why no one notified her that he was being hospitalized, an allegation the Harris County Sheriff's Office denies.

Evan Lee, 31, is in the hospital on a ventilator. His mother, Jacilet Griffin, told ABC13 that doctors do not expect him to survive.

"It is my understanding that he won't. But as a believer, I'm not giving up," said Griffin. "I think the Harris County jail has failed."

While Griffin said Lee was found unresponsive on March 18 in his cell, the Harris County Sheriff's Office said he complained of abdominal pain and went to the clinic that day. He was then taken to Ben Taub Hospital.

Griffin told ABC13 she knew her son was hospitalized only because a doctor called her. From then on, Lee's condition deteriorated. Griffin said a doctor told her Lee had head trauma.

She said the dozens of phone calls to the Harris County Sherriff's Office and Harris County jail were not answered or returned, and no one from the county called her.

"Sheriff Gonzalez did apologize, and (the) apology is accepted. But I'm hoping nobody, no human being, as I told him, I don't want (their) family or anyone to experience this," said Griffin.

Griffin wants to know what happened inside the jail that led to her son's life-threatening injuries.

Gilliland said Lee, who was jailed on a charge of aggravated assault, was involved in a fight with another inmate on March 11, a week before he was hospitalized. He was checked out by medical staff and cleared, Gilliland said. He added that if Lee does not survive, Texas Rangers will head up an investigation.

"I understand our judicial system is in place for us and to protect our society, but I don't feel like anyone's punishment should be death," Griffin said.