'I WILL SHOOT YOU': Victim recalls armed carjacking that ended in deadly crash involving teens near Gulf Fwy 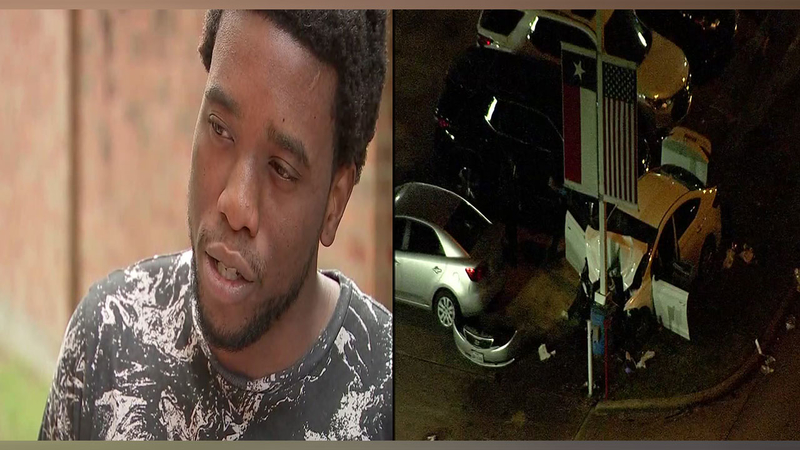 HOUSTON, Texas (KTRK) -- The 16-year-old driver of a stolen vehicle involved in a deadly crash off the Gulf Freeway has been arrested and charged with aggravated robbery in connection to a carjacking in southeast Houston, police say.

Authorities say the teen driver was with three other teens in the stolen white Hyundai Elantra when it crashed on the Gulf Freeway feeder southbound at Scarsdale early Friday morning.

A suspect in the front passenger seat was killed while the driver suffered minor injuries. The two back passengers were taken to the hospital where one of them is in critical condition.

Police say the Elantra was the same one reported stolen around 1:30 a.m. after an armed carjacking around the 3300 block of Navigation.

A security guard at a convenience store in the area says that the carjacking victim went to the store to call the police. Authorities say the carjacking did not happen at the store.

The carjacking victim, Wayne, talked exclusively with Eyewitness News. He said he was at a friend's house in his car when at least two masked robbers approached his window with a gun and demanded he get out.

"They put the pistol to my head and said, 'I will shoot you,' and so I put my hands up and they told me to empty all my pockets out. I took everything out of my pockets and threw it on the ground," said Wayne.

Wayne adds he complied with the suspects.

"I was trying to stay as calm as possible and as low key as possible," he said.

After that, he said the crooks took off. Wayne went to a nearby gas station on Navigation to call the police.

About 45 minutes later, a passerby called Houston police after seeing the vehicle smashed along the Gulf Freeway feeder road.

Police say the car was speeding as it exited the freeway southbound onto Scarsdale. The vehicle hit a street sign, then slammed into a pole in front of the AutoNation car lot. It also crashed into a parked car with such force that it spun the parked car completely around.

The car snapped a pole and stopped after hitting a second large pole.

ABC13 reporter Jeff Ehling is at the scene of a deadly crash in southeast Houston.

The stolen vehicle was not being chased by HPD at the time of the crash. Police say they found a weapon inside the car.

Due to the teen suspect's age, police will not release his name or photo to the public, but they say he is charged with aggravated robbery.

"I hope something can help to impact them to kind of change the way that they operate. You know, 'cause I could have died last night and I have a mom. I have a sister. I have a nephew. I have a life and that's not cool, not just for some items or money," said Wayne.

Follow Marla Carter on Facebook and Twitter.
Report a correction or typo
Related topics:
houstonfatal crashspeedingtraffic
Copyright © 2021 KTRK-TV. All Rights Reserved.
TOP STORIES
Arrest made in case of Alvin abduction, sexual assault of a minor
20-year-old shot to death during break-in of Conroe home, police say
Man accused of dismembering mom's body after murder appears in court
Houston Astros on pace for record beer year
Astros Game 6 guide: Closures around Minute Maid Park back on tonight
Cleveland man indicted in connection with U.S. Capitol attack
The University of St. Thomas offers low-cost counseling services
Show More
JJ Watt on Texans: 'It hurts me to see where' fan base is now
More truck drivers needed to assist with US' supply chain shortage
Don't get stuck in these traffic closures this weekend
Warrant: Baldwin didn't know weapon contained live round
Prop guns: What they are and how they can kill
More TOP STORIES News