$400 bill for half a month: Customers upset with energy company HOUSTON, Texas (KTRK) -- Customers of energy company Griddy are outraged over a price hike that has some customers paying hundreds of dollars only halfway through the month.

"Scrambling. Literally. My wife was hitting me up on my cell phone," said Stanley Philip, a former Griddy customer.

Philip has since switched energy providers after discovering his utility bill was nearly $400 as of Aug. 15.

The husband and father told ABC13 he regularly monitors his family's energy usage on his phone and noticed the cost per kilowatt rapidly climbing in the last few days.

"Every two and a half minutes, it refreshes what the rates are, so I looked at it and, at one point, it was $8. And I'm like, 'Okay?'" Philip recalled.

Jesson Bradshaw, CEO of Energy Ogre, a company that helps consumers in selecting the best utility supplier, explained the costs associated with energy is constantly fluctuating.

"It's an ever-changing market. It's always a function of what supply and demand looks like," Bradshaw said.

For a company like Griddy, Bradshaw said customers must hope the supply for energy remains plentiful, even when there is a huge demand.

He explained that's not always the case.

"I think the biggest problem is a lot of folks that signed up for those kinds of plans didn't fully understand the exposure. That's the big problem," Bradshaw said.

Griddy says it prides itself on providing customers with wholesale electricity, which saves the customer money.

The company provided a statement and tips to ABC13 regarding the recent complaints coming from customers:

With these recent price spikes, we would like to do three things - speak to some proactive things that we strongly urge our members to do, provide some data points, and talk about what we're doing as we move forward.

Sounds simplistic, but there are two parts to the electric bill equation - price and usage. 96% of the time the wholesale price is below the EIA Texas average, so nothing needs to be done to enjoy savings. There's another 3.92% where the price is moderately above the EIA Texas average, so the consumer can choose to reduce consumption or not and there won't be a large impact. It's the 0.08% of the time when the price spikes really high that the usage side of the equation really comes into play. When that happens, we strongly urge our members to turn off as much as they can. When temperatures are high, that may mean options such as getting out of the house to leverage air conditioning at coffee shops, malls, or going to the movie theaters may actually be a money-saving activity because that means less electricity usage during times of highest peak prices.

Many of our Griddy members are using the control features and automated tools that we provide in order to avoid or reduce consumption during those critical peak hours between 2-6 pm, and are using the cheaper hours to cool their house.

This peak is about 5 times worse than anything we've seen in Texas for the last 5 years. 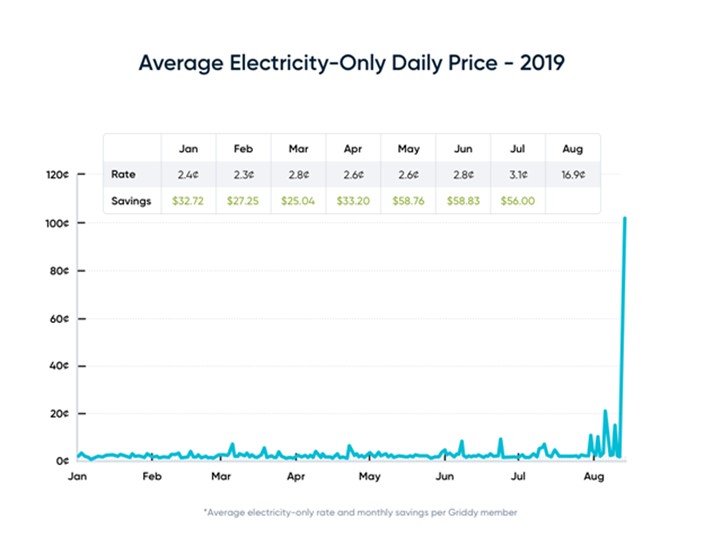 Despite this August, Griddy members who have been on with Griddy for a year will still see savings against the EIA Texas average for the last 12 months.

We are giving back the August membership (i.e. all the money we would have made in the month) to our members and we're trimming our budget as a result.

We are evaluating new ways to help our members with price spikes, thinking about new technology and innovation we can introduce to help our members manage these situations in the future, and working through a plan to make sure our members have a full suite of tools as quickly as possible.