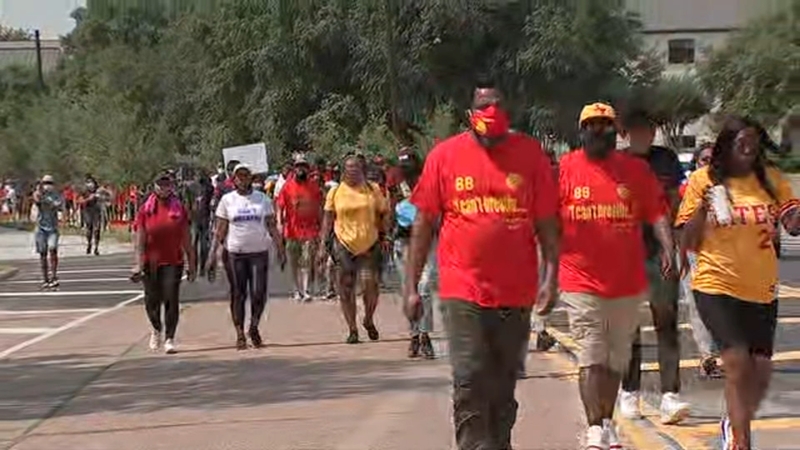 HOUSTON, Texas (KTRK) -- Former classmates of George Floyd are holding a vigil and walk this morning in his memory in the Third Ward.

Floyd died Monday beneath a police officer's knee while handcuffed in Minneapolis.

Yates alumni organized Saturday's event, which began at 9 a.m. at MacGregor Park. Participants are expected to walk from the park to Jack Yates High School and then to the Cuney Homes before returning, according to a statement from organizers.

Attendees are being asked to wear crimson and gold, the Yates school colors. Masks and gloves are requested to be worn and social distancing will be enforced, organizers said.

"The Alumni of Jack Yates is deeply saddened and enraged over the murder of our beloved Lion," organizers said in a statement. "We wish to express our support for the Family and Friends. We Demand Justice for this injustice."

Floyd, 46, grew up in Houston's Third Ward and emerged as a star tight end for the Yates High School football team. He played in the 1992 state championship game in the Houston Astrodome.

Saturday's event, described by organizers as peaceful, comes less than 24 hours after nearly 200 were arrested in downtown Houston during chaotic unrest. Four police officers were injured and eight police cruisers were damaged.