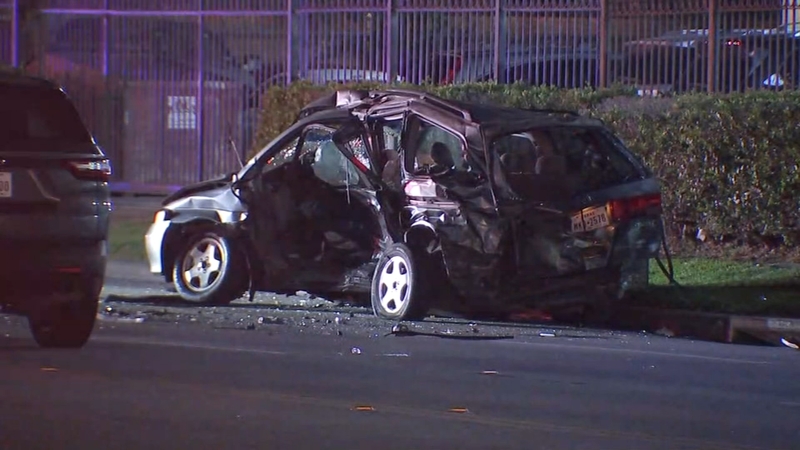 KATY, Texas (KTRK) -- Authorities say drugs may have played a role in a deadly crash in the Katy area overnight.

Deputies arrested 17-year-old driver Mohammed Yasin for allegedly driving while intoxicated in the three-car crash. He was booked into the Harris County Jail.

"Reconstruction is still being done. From my personal experience, I would say this is a very high-speed impact and a high-speed crash," Sgt. Daniel Coop said. "So that would be consistent in my own experience, but again, reconstruction will determine the upper, more accurate speed."

According to the Harris County Sheriff's Office, the driver of a Honda Odyssey was attempting to exit the McDonald's parking lot when Yasin, who was driving a Hyundai Sonata, slammed into him.

There were two other teens in the Hyundai at the time of the crash.

@HCSO_VCD units are investigating a fatal crash at 1811 Fry Rd, near Park Row. Preliminary info: one of the drivers involved has been pronounced deceased at the scene. #HouNews pic.twitter.com/cjJgQUtGi2

The crash sent the Honda across all three lanes, into oncoming traffic, where the car was hit a second time by a Dodge Challenger, investigators said.

The driver of the Honda was pinned inside his vehicle, deputies said. He was pronounced dead at the scene.

The driver of the Dodge was not injured.

The three teens in the Hyundai were taken to the hospital.

One witness said the Hyundai was driving fast and erratically behind her. After the wreck, she tried to help the three teens.

"I've made the three boys from the silver SUV sit down. I checked on the family that had the SUV that was parked in the middle of the street," Morgan Cummings Jarosek said. "I did not go to any of the other vehicles that were involved in the accident because they were surrounded by a multitude of people, and I didn't want to add to that."

At the hospital, investigators evaluated Yasin and observed him to have signs of intoxication.

The case remains under investigation by the Vehicular Crimes Division of the Harris County Sheriff's Office.