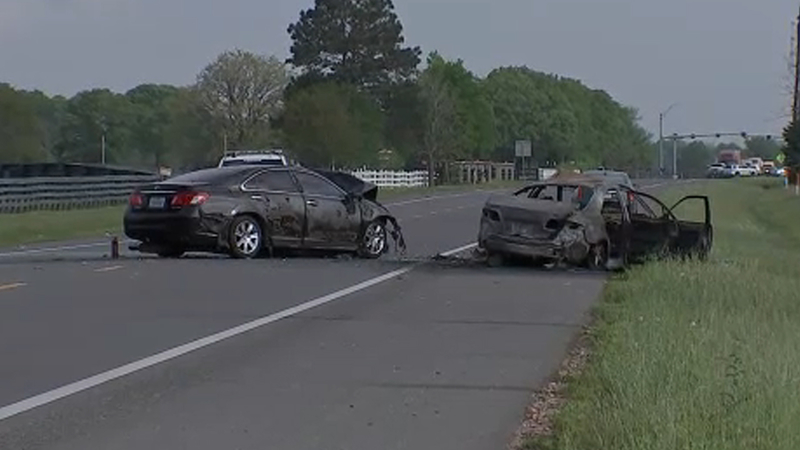 According to the Fort Bend County Sheriff's Office, a driver in a black Lexus was driving southbound, attempting to pass another vehicle on FM-359, a two-lane highway, near Settegast Ranch Road just after 5 a.m.

The Lexus crashed head-on into a silver Mazda, which was traveling northbound, causing the Mazda to burst into flames, deputies say. The driver of the Mazda was pronounced dead at the scene.

Major Accident: FM 359/Settegast Ranch Rd. At 5:09am dispatch received a call regarding a head-on collision with a vehicle on fire. 1 DOA, 1 transported to hospital. Crash team on scene. Avoid area is possible. pic.twitter.com/AbZb0OKKrD

Deputies believe the crash was caused by foggy conditions, stating that the Lexus driver could not see the oncoming driver when attempting to pass.

The driver of the Lexus was flown to Memorial Hermann and is expected to survive.

DPS Troopers are investigating a fatal crash on FM 359 near Settegast Ranch in Fort Bend County.

Deputies say they do not expect the Lexus driver to be charged since it was legal to pass in the area, and it appears the foggy conditions caused the tragic accident.

"No signs of intoxication, drugs or alcohol," Trooper Derrick Williams said. "In addition to that, we don't anticipate any other charges for that matter."

The driver of the car the Lexus attempted to pass was the individual who called 911 after the crash, deputies say.

Fort Bend County deputies are continuing to investigate the cause of the crash.

DPS says it was super foggy when a black Lexus tried to pass a car on FM 359 around 5am. Driver didn’t see silver Mazda coming at him. He hit and killed the Mazda driver.

Lexus driver flown to Mem Hermann and should recover.