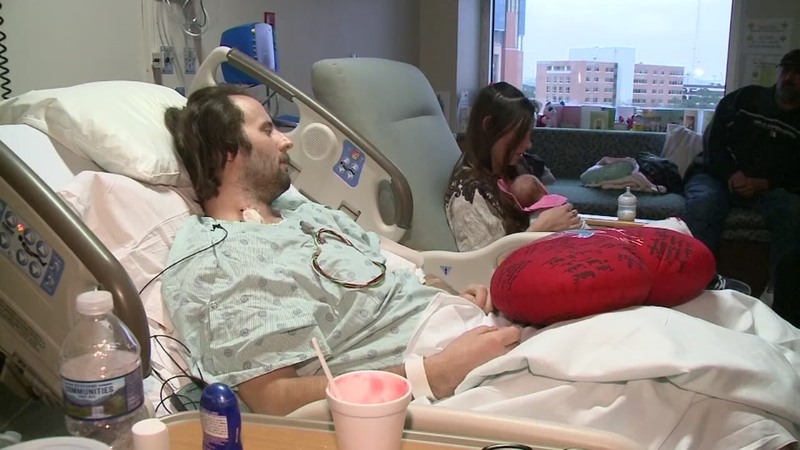 NORFOLK, Virginia -- A North Carolina man is recovering after a brush with death last month that left him in a medically-induced coma.

It started with a cough, but doctors discovered the man had a serious heart condition.

When he regained consciousness, his wife had given birth, but he says when he woke up he didn't remember her being pregnant.

John Lancaster told WTKR-TV, "I remember having a cough and then I remember going to the hospital in Elizabeth City and then I woke up here."

Lancaster couldn't breathe back on January 17 and his wife encouraged him to go to the hospital.

Doctors detected an undiagnosed heart condition that affected his lungs and almost killed him.

Lancaster was placed in a medically-induced coma. When he woke up he didn't remember his wife was nine months pregnant.

She gave birth January 24, the same day he had surgery.

Lancaster has a long recovery ahead of him but he says he can't wait to get home to be with his wife and his new daughter.
Report a correction or typo
Related topics:
health & fitnessbabypregnancyu.s. & worldheart defects
TOP STORIES
Police need help finding parents of baby found alone in SW Houston
Motorcyclist appears to have fired shots at other driver on I-45: HCSO
Estranged husband, wife die in apparent murder-suicide with teen there
Ambush shooter gets life sentence after 2 Houston brothers killed
Slim hope for rain Wednesday as heat continues
Jury finds man guilty of murder of rapper Nipsey Hussle
Hours-long Charlotte police chase ends with crash
Show More
Dallas Cowboys criticized over deal with gun-themed coffee company
Woman finds her son dying from gunshot wound outside apartment: HPD
Suspect confesses to parade attack, contemplated 2nd shooting: Police
Deadline nears for Houston businesses to install surveillance cameras
14-year-old boy shot in the leg while taking out the trash in Katy
More TOP STORIES News