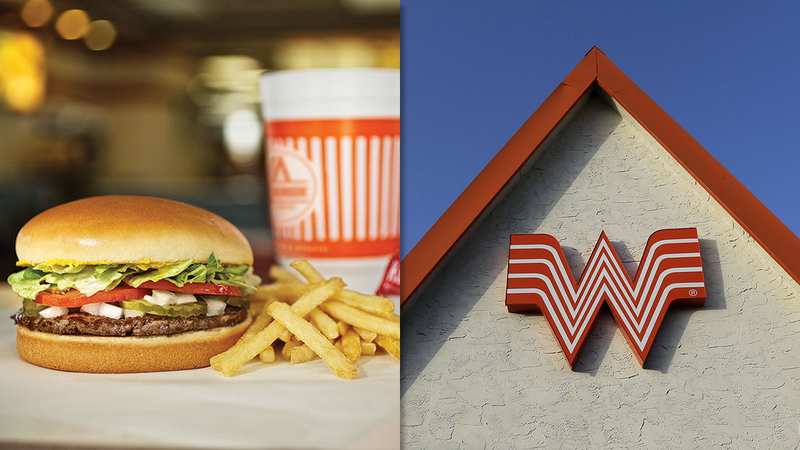 HOUSTON (KTRK) -- While everyone is murmuring about In-N-Out moving onto Whataburger's Houston turf, here's the real beef: their California burger game is as weak as their Animal Style sauce.

Will people try it? Sure.
Will Texans switch? Don't be ridiculous.

RELATED: Our sister station KGO weighed in on the debate


Here are seven reasons Whataburger is going to continue to reign supreme in the Bayou City, according to ABC13 web producer Brandon de Hoyos:

Where do we even begin? How about the literal millions of meal combinations you can make at Whataburger, with myriad toppings for that all-beef patty of pure heavenly bliss.

Sitting in front of the orange and white menu brings an all-familiar glazed look to your eyes as you contemplate your delicious fate.

You can have a savory Whataburger Patty Melt, with grilled onions and creamy pepper sauce.

In-N-Out Burger is finally coming to #HTown (https://t.co/z1l1vE48p4). What do you like better @Whataburger or @innoutburger? #NomNomNom

You can chomp into the holy grail of Tex-ican favorites, the Monterey Melt, with its two American beef patties, American and Monterey Jack cheese, grilled fajita peppers and onions, and that creamy jalapeno ranch.

You can get chicken fingers with gravy, ginormous cinnamon rolls, breakfast tacos, chicken fajita tacos, hot apple and lemon pies, and bacon. All that glorious bacon, on anything you order.

If you've never been to In-N-Out, spoiler alert: You have three burger choices, four if you count dousing your meal in this 'Animal Style' sauce faux-nomenon.

Unless you drown In-N-Out's fries in that Animal Style sauce, you have all of about three minutes to finish them before they turn into a cold and greasy pile of disappointment.

Every time I've eaten those fries near Burbank, Calif., Dallas or San Antonio, I've always left wondering how people can think this is a side anybody wants. Frankly, the carton probably tastes better.

It's 2am. There's a call between your brain and your stomach. Who will answer that call?

Before the graveyard shift, after the nightclub, between errands with the kids, or whenever you need to eat your feelings, Whataburger is at the ready with 24-hour a day service.

In-N-Out Burger closes at 1am in Texas, making it that unreliable friend who only makes excuses for why they can't stay out on a school night.

Whataburger is a Texas success story

It all started as a humble little burger stand on Ayers Street in Corpus Christi, home of pristine beaches and Selena.

When Harmon Dobson opened the first Whataburger, he offered the biggest burger Texans had ever seen with a five-inch bun that required both hands. Ten years later, Harmon opened his 21st restaurant in Florida, the beginnings of the monster it is today.

Its first orange and white A-framed building was erected in Odessa in 1961.

Whataburger is ours. Texans can take pride in helping watering that seed.

Whataburger is right around the corner

In-N-Out opened its first restaurant in 1948, two whole years before Whataburger, but has less than half the number of restaurants as the Texas giant.

You can find their 313 restaurants in California, Nevada, Utah and yes, Texas.

Let's face it: If fast food chains could run for president, we'd be calling it the Orange and White House right now.

Ketchup is alright, but their spicy ketchup packs a one-two punch of flavor that is unlike any fast food experience before.

It's so good and demand was so high, Whataburger's spicy ketchup went from a limited-time offering in 2011 to a full-time favorite. You can even buy some for your home pantry on the Whataburger website.

Which leads to my final point...

Whataburger innovates. In-N-Out is stuck in the past.

This isn't an attack on the nostalgic feel of In-N-Out's restaurants, but an undeniable fact: the California chain doesn't hold a candle to Whataburger's vision for a tastier future.

Not only can Whataburger serve you breakfast, and offer their menu at 24-hour locations, they can satiate your hunger at home, too.

Whataburger now offers a wide variety of grocery items at that other Texas favorite, the grocery store known as H-E-B: