SE Houston neighbors in desperation for food after massive fire 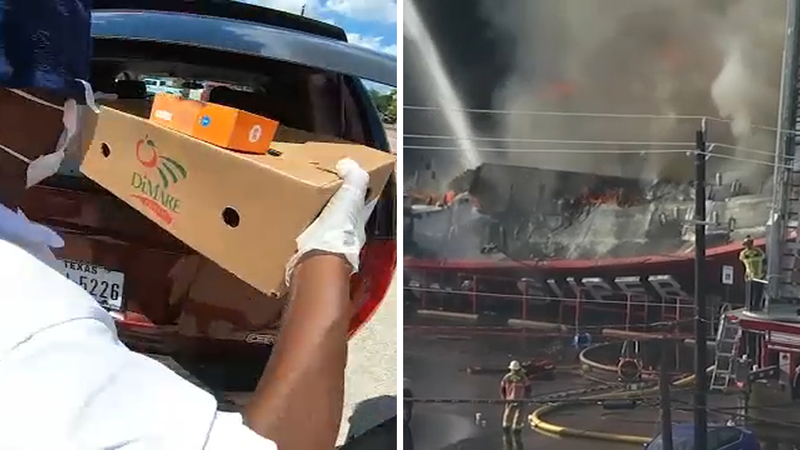 Neighbors in desperation for food after massive fire

HOUSTON, Texas (KTRK) -- While investigators still search for the cause of the massive fire that destroyed Jim's Supermarket in southeast Houston, people who depend on the store for food lined up for blocks during an emergency food giveaway Monday.

The distribution was organized in part by U.S. Rep. Sheila Jackson Lee and the Houston Food Bank, right across from Jim's on Yellowstone near Calhoun.

The giveaway was scheduled from 1 p.m. to 5 p.m., but by closing time, the line was just as long as it was when it started. It's understandable given this part of the city is considered a "food desert."

"When it comes down to people like me who maybe have a smaller income bracket, just to be honest, it's kind of hard to get that good food. When you have it available to you, and for free, it's honestly like a God-send," said Saffire Stone, who was among the food recipients.

Speaking of Jim's, Stone said the supermarket stood out over others.

"We have a few meat markets around here, but Jim's is a very big neighborhood staple. They offered things to the community that other stores did not offer," she added.

Jackson Lee recognized the desperation in the wake of the fire, motivating her to lend a hand.

Despite the giveaway, the congresswoman knows Monday's distribution is not a long-term fix, though, she said additional help could come soon when she goes back to the Capitol.

"This can be a public/private partnership. Karen [Huynh], the owner, says she's going to rebuild. She has some insurance. But I think this is eligible for block grant dollars. Those are federal dollars," Jackson Lee said.

Rebuilding won't happen overnight. Neighbors could have to wait for months until a new store is rebuilt.

Thankfully, hundreds, including Stone, won't have to wait months to get fresh food after losing their source last Friday.

"It's well-being. It's improving the quality of life. We don't always have very good produce, and things like that around here," Stone said.

As for the fire, ABC13 reached out to the Houston Fire Department for an update on the investigation, but didn't get one. A day after the fire, Eyewitness News learned arson crews were on site.