Gov. Chris Christie on NJ flooding: 'Want me to go down there with a mop?' 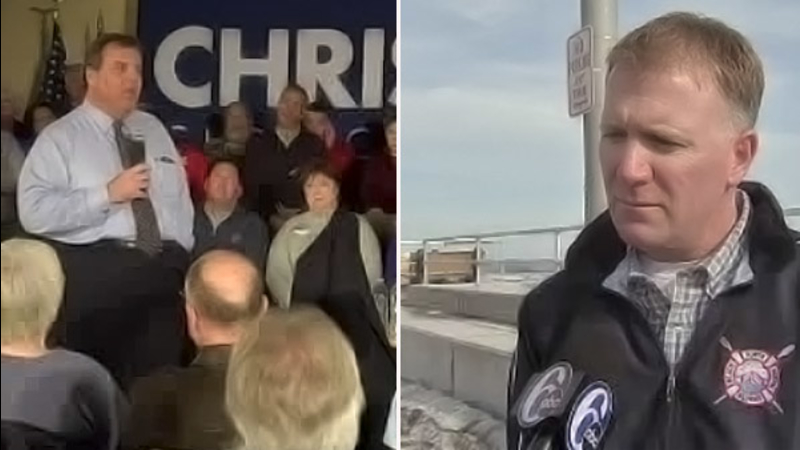 VIDEO: Christie on NJ Floods: 'Want Me to Go Down There With a Mop?'

NORTH WILDWOOD, NJ -- The mayor of North Wildwood, NJ says he is "disappointed" by Gov. Chris Christie's controversial campaign trail comments about the flooding experienced in Cape May County during the Blizzard of 2016.

Mayor Patrick Rosenello issued a statement Tuesday morning, after Christie referred to him as "one crazy mayor down in south Jersey."

The governor was asked by a young woman at a town hall why he was campaigning in the state instead of helping survey damage caused by the snowstorm.

She said her family and friends in the state were concerned.

New Jersey Gov. Chris Christie is defending his decision to return to the campaign trail after this weekend's record-breaking blizzard.

Video of the exchange shows Christie responding, "Well because it's already done."

He said only one county in the state experienced flooding and asked what she expected him to do.

"You want me to go down there with a mop?" he asked.

Christie went on to say, "I heard one crazy mayor down in south Jersey say this is worse flooding than Sandy. Here's the one thing one thing you need to know about that mayor. His town didn't get hit by Sandy."

Mayor on Christie's comments: "I am disappointed that he would lower himself as much as he did this evening."

Action News interviewed Rosenello in North Wildwood Monday before Christie made his comments.

The mayor told Action News no evacuation was ordered during the blizzard because the storm surge was predicted to be below 9 feet.

But the surge was greater than expected, and 150 people did have to be rescued from their flooded homes in North Wildwood.

Tuesday morning, Rosenello responded to Christie's criticism of him, releasing the following statement:

I have watched the video of the comments that Governor Chris Christie made at a campaign event in New Hampshire this evening, where he referred to me as the 'Crazy Mayor of North Wildwood.' As one of his earliest supporters during both of his runs for Governor and having met and interacted with him and his family numerous times over the course of his terms as Governor, I am disappointed that he would lower himself as much as he did this evening.

I am more disappointed, however, in the evident lack of concern or respect that he is showing for the first responders, residents, business and property owners of North Wildwood, Cape May County and other areas of New Jersey impacted by this storm. Having spent the entirety of this event in North Wildwood and coordinating with our emergency responders to safely rescue approximately 150 people from their flooded homes, my perspective is somewhat different from that of the Governor as he campaigns in New Hampshire.
Related topics:
politicsfloodingblizzard of 2016u.s. & worldchris christie
Copyright © 2021 WPVI-TV. All Rights Reserved.
TOP STORIES
Man killed inside East Harris County home in drive-by shooting
Houston Afghan Americans hold peaceful protest
Funeral services to be held Monday for fallen HPD officer
Man arrested for killing ex-girlfriend's new boyfriend, deputies say
Moisture returns and rain chances are on the rise
31-year-old Cy-Fair Fire Dept. driver operator dies of COVID
Texas border crossing where migrants made camp reopens
Show More
2 killed in separate auto-pedestrian crashes
Harris County sheriff's deputy hurt in crash involving horse
Dallas Cowboys' RT attempted to bribe NFL drug-test collector
Man shot to death in 'jealous rage' shooting at SW Houston hotel
Man killed in drive-by shooting in SE Houston, police say
More TOP STORIES News