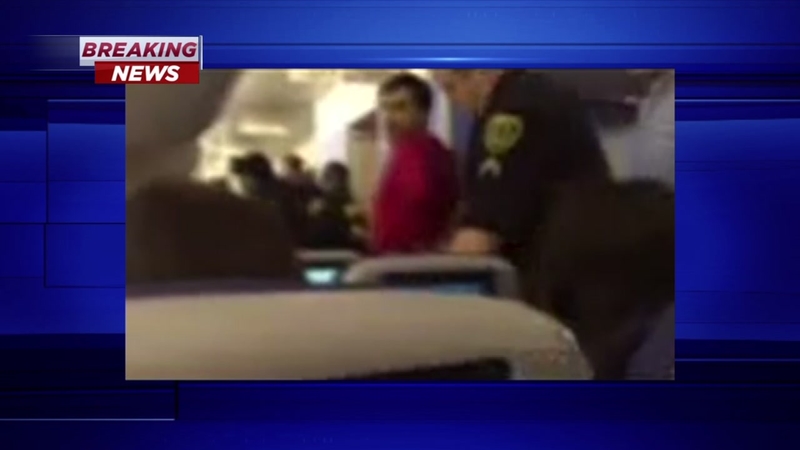 Flight canceled in Houston after disturbance

HOUSTON (KTRK) -- A KLM flight bound for Amsterdam was canceled Wednesday after a passenger disturbance grounded the plane at Bush Intercontinental Airport for several hours.

Air France flight 8412 operated by KLM was supposed to depart at 4:03pm. However, it never made it out of the Bayou City.

"Normal. We checked in and everything was going smooth," passenger Travis Wilson said.

But then the drama unfolded on a KLM flight leaving Bush Intercontinental Airport headed for Amsterdam.

"It's kind of scary when you don't really know what's going on," passenger Dieter Erhard said.

Travis Wilson and his wife are from France, but were in Houston on their honeymoon. They were onboard when they say two men started arguing.

"They were texting and they heard the gentleman say, 'Now, now, now,'" Wilson said.

Passengers say an elderly woman sitting beside the men alerted a flight attendant.

"She got out and reported to gentleman acting very suspiciously," Wilson said.

"The captain said we are very sorry to passengers have misbehaved," Erhard said. "Security came in today and a whole bunch of them."

Those two men were handcuffed and escorted off the plane. The flight returned to a cargo area, where passengers were eventually removed.

At the end of all the chaos, airport police and FBI officials determined the two men taken off the flight were not a threat. They were released, but the flight was canceled.

An airport spokesperson said passengers were being re-booked on a case-by-case basis.
Related topics:
houstonair travelbush intercontinental airportairlineu.s. & world
Copyright © 2021 KTRK-TV. All Rights Reserved.
TOP STORIES
Arrest made in case of Alvin abduction, sexual assault of a minor
20-year-old shot to death during break-in of Conroe home, police say
Man accused of dismembering mom's body after murder appears in court
Houston Astros on pace for record beer year
Astros Game 6 guide: Closures around Minute Maid Park back on tonight
The University of St. Thomas offers low-cost counseling services
JJ Watt on Texans: 'It hurts me to see where' fan base is now
Show More
More truck drivers needed to assist with US' supply chain shortage
Don't get stuck in these traffic closures this weekend
Warrant: Baldwin didn't know weapon contained live round
Prop guns: What they are and how they can kill
4 teens accused of luring victim to his death in SE Houston
More TOP STORIES News