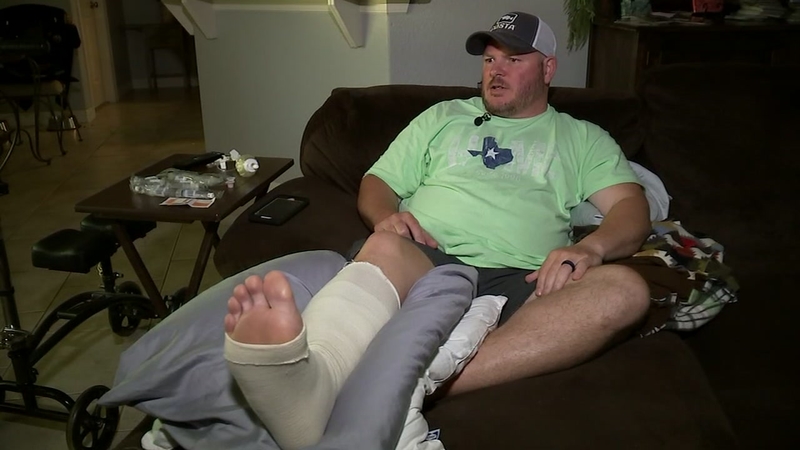 MONTGOMERY COUNTY, Texas (KTRK) -- Lt. Brian Bagwell has clocked nearly two decades with the Montgomery County Sheriff's Office, but it was a fishing trip that nearly cost him his life.

"Probably the scariest thing I've ever dealt with in my life," Bagwell said. "It's not everyday somebody tells you, you might lose your life or your leg."

A recreational fisherman, he was in the Gulf waters off the Chandeleur Island chain with a group of buddies, just south of Gulfport, Mississippi.

"Woke up with severe chills to the point where I couldn't control my body movements. My arms were shaking out of control," Bagwell said.

In an interview only with Eyewitness News, he explained his calf was sore and had a raised bump.

"It was just like pink, just lightly pink," Bagwell said.

A trip to Memorial Hospital in Gulfport confirmed an infection from vibrio vulnificus, known as the flesh-eating bacteria.

The CDC reports one in seven people with this infection die, many others lose limbs. Bagwell credits his fast action to saving both his life and leg.

"I knew about vibrio and I knew it existed," he explains.

Bagwell says he recognized the symptoms because he knows other people who have contracted the bacteria and lost limbs.

According to the CDC, this bacteria grows in brackish or salt water, typically during warmer months May through October.

People with open wounds are the most susceptible. Bagwell says he was in the water for less than five minutes over the course of two days.

"I didn't even hang my feet over the edge of the boat," Bagwell said.

But he still wound up with a wound from his ankle to his knee where they had to remove tissue.

"It is an eye-opener. Makes you realize how life can change so quickly. And you don't have any control over it, so better grab on and hold on because it can change in the blink of an eye," Bagwell said.

He hopes to be back on the force by October.

His family has set up a GoFundMe account to help cover the costs of medical bills.

They say any funds left over will go to other victims of vibrio bacteria.