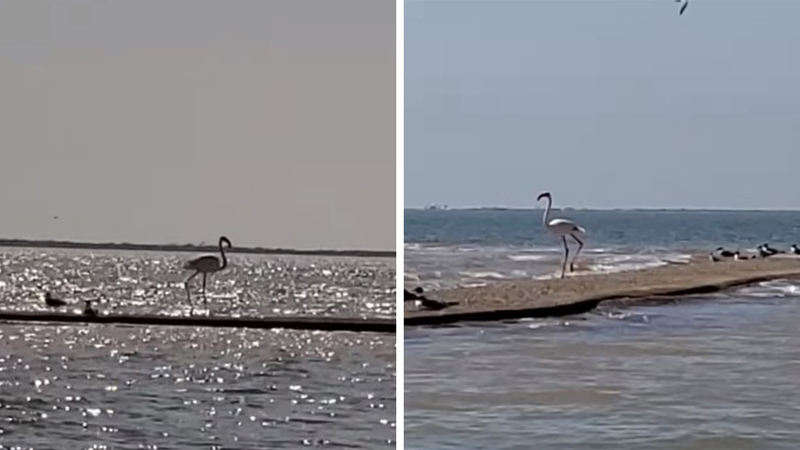 PORT LAVACA, Texas (KTRK) -- One of two flamingos that escaped from a Kansas zoo during a storm 17 years ago has been spotted on the Texas coast, wildlife officials said.

The Coastal Fisheries division of Texas Parks and Wildlife confirmed Tuesday to The Associated Press that the African flamingo - known as No. 492 because of the number on its leg band - was captured on video shot March 10 by an environmental activist near Port Lavaca, Texas, at Rhodes Point in Cox Bay. Officials were able to make out the bird's leg band on the video.

According to a social media post, the escapee flamingo is also called "Pink Floyd."

No. 492 and another flamingo escaped from the Sedgwick County Zoo in Wichita on a stormy night in June 2005. Employees had not yet clipped the birds' wings to prevent them from flying, which facilitated their escape.

While the other flamingo was never seen again, No. 492 has been spotted several times in Wisconsin, Louisiana and Texas, sometimes with other wild flamingos.

It had been years since its last reported sighting -- until this month. It seems like No. 492 likes Texas. The same bird was spotted in the same area along the Texas coast four years ago.

Zoo officials have never made plans to recapture No. 492, despite the sightings, saying there is no easy way to do so without disturbing other wildlife.

The escaped flamingos, known for their distinctive pink feathers and long legs and necks, were born in Africa then shipped to the Kansas zoo in 2004 with 39 other flamingos.