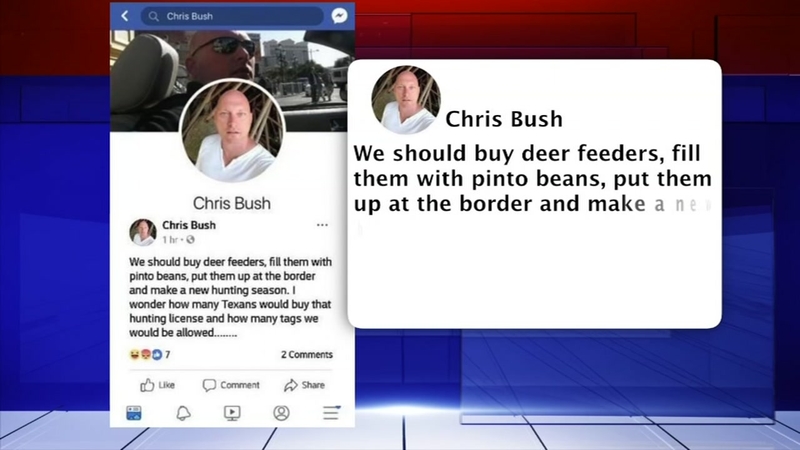 Veteran firefighter loses job after post about hunting on the border.

HOUSTON, Texas (KTRK) -- A part-time firefighter with the city of Bellaire and the Westfield Fire Department has been fired after an incendiary Facebook post.

Earlier this week, Chris Bush posted this message on Facebook: "We should buy deer feeders fill them with pinto beans put them on the border and make a new hunting season. I wonder how many Texans will buy that hunting licenses and how many tags we would be allowed..."

The post was shared numerous times by people concerned that a first-responder would publicly advocate shooting Latinos. The concerned citizens also contacted Bush's places of employment.

"His choice of occupation, which is essentially rendering aid and saving lives seemed at odds with someone saying let's hunt people," said Michele Barth, one of many shocked by the Facebook posting.

In trying to get his side of the story, Eyewitness News tried to talk to Bush, his wife Cindy answered the door and defended her husband.

"Well, I don't believe we should let other people over until we take care of people under our freeways," said Cindy Bush. She also said her husband was not available for comment.

On Friday, Eyewitness News confirmed he is no longer employed with any of the three agencies.

Bush spent the most time at Westfield Fire Department, where he first joined as a junior firefighter volunteer more than 30 years ago. He was a paid part-time firefighter there, where he worked alongside Chief Stephen Whitehead for three decades.

"Shocked, disappointed, outraged for the shame it brought to him and the department," said Chief Whitehead, who says Bush's 30 years with the department is now over. "He messed up, he was sorry, and he wishes he could take it back."

"Wednesday morning we became aware of an inappropriate and offensive social media post by a part-time firefighter. Upon learning of that post, we took immediate and appropriate action, and the individual is no longer employed with the City of Bellaire."

"Mr. Bush is no longer employed at Acute Medical Services. We at AMS champion diversity and respect all dimensions of life, and do not discriminate based on age, race, religion, ethnicity and national origin, accessibility, disability, gender and gender identity, sexuality, class, marital status, veteran status or any other human dimension. As public servants, we have a duty to serve all human life that needs our help."