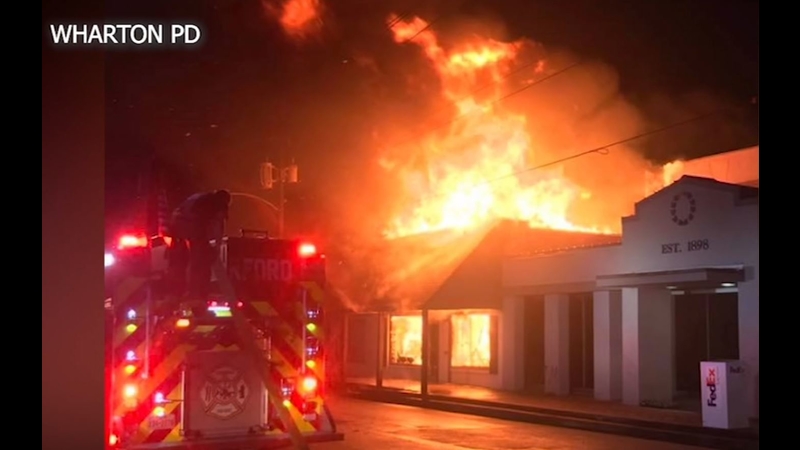 The fire is said to have started in a law office, which Wednesday morning was little more than charred furniture and a collapsed roof.

How many buildings can survive a 5 alarm fire? Ask the Wharton Spectator Journal- which never missed a beat- or deadline- #whartontx #abc13houston pic.twitter.com/PeqUzhluRg

"This is our historic district. Many buildings are over 100 years old. We want to protect them," Wharton Fire Chief Anthony Abbot said.

Wharton firefighters and firefighters from Hungerford, Boling, El Campo and East Bernard worked to put out the massive blaze.

The law office was sandwiched between a bank on one corner, and the offices of the Wharton Journal Spectator newspaper.

Initially, newspaper employees who received phone calls and messages in the middle of the night thought the newspaper office was on fire as well.

"This building was built in 1930," said Bill Wallace, publisher of the paper. "It had firewalls and whoever did the construction back then knew what they were doing."

The newspaper office was busy Wednesday, despite a strong smell of smoke, preparing their East Bernard newspaper edition for press.

The Wharton Journal Spectator was founded in 1886, and it is said to have missed very few deadlines in those years. Wednesday was no exception.