GO GET 'EM: 5 hot t-shirts every Houston Astros fan should own 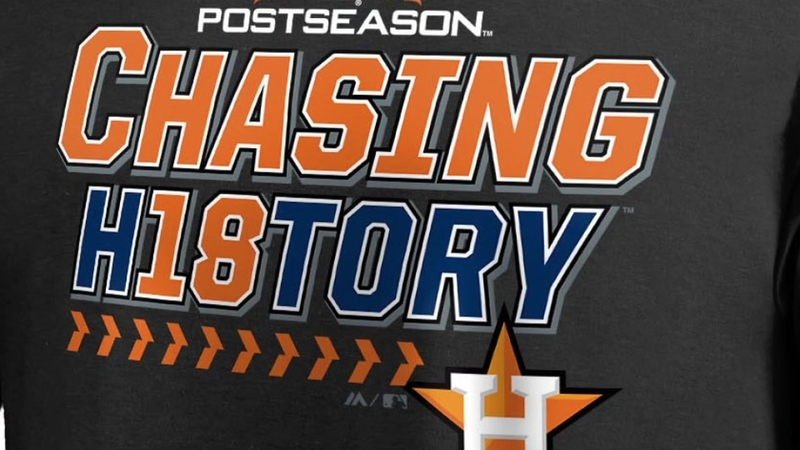 HOUSTON, Texas (KTRK) -- While the Astros pride flows through Houston as the team heads to the American League Championship to face off against the Red Sox, we are scouting out the best Astros shirts.

There's been plenty of infamous Astros shirts since their historic World Series win last year, many of them steering away from the traditional baseball jerseys or plain Astros logo.

The "Not So Special" shirt features 'Stros third baseman Alex Bregman with a mug of his face and the infamous words next to him.

During a game back in May, an opposing pitcher said Houston is "not that special." BreakingT's shirt company decided to make the statement into a shirt after Bregman and the team made it to the ALCS.

Back in May, an opposing pitcher said Houston is "not that special."
Now it's mid-October, and @ABREG_1 and friends are still playing.#WearTheMoment with our latest tee: https://t.co/GozqFeIdHt pic.twitter.com/LN52ddY8gj

The popular 'Back To Back' shirt worn by Bregman prior to Game 1 of the ALDS is now being reprinted after high demand.

During a pre-game press conference with the media, Bregman paused to take his jersey off because he said he was getting hot, revealing the popular shirt.

The video went viral, and it made many Astros fans love Bregman even more and looking for that same piece of clothing.

The shirt will be available Thursday at a the Truck Yard's pop-up shop.

After the Astros were caught giving their fans their best steely-eyed stares from the dugout, a T-shirt commemorating the moment was born.

Shirts with the image of Alex Bregman and friends were made for purchase.

A HR celebration for the ages. @TonyKemp, @ABREG_1, @Twhite409 and their Houston teammates are the Dream Crushers, and it's Dream Crushing SZN.

These shirts were originated when Tony Kemp and Evan Gattis looked to bring some traditions Kemp witnessed during his time with the Fresno Grizzlies in AAA.

After the gesture went viral, Kemp decided to create "Hugs for Homers' shirts. All proceeds are donated to the Houston Astros Youth Academy.

Tony Kemp is known for being a team player and playing all three outfield positions, among other things.