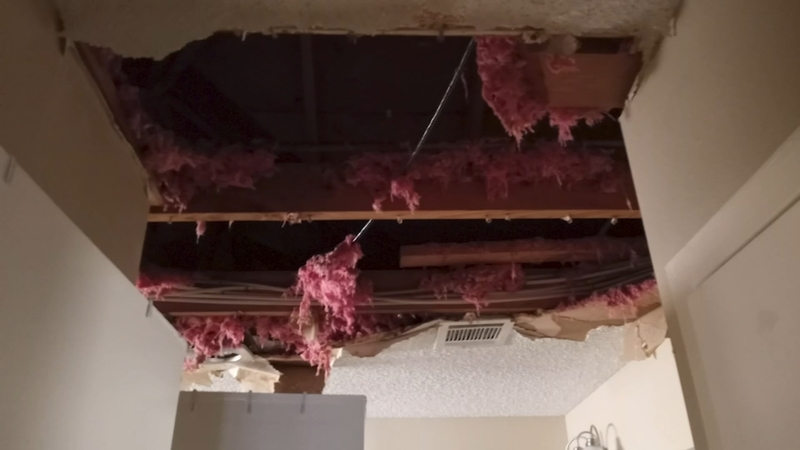 Families in great need of help while waiting for home repairs

Single parent Christina Carter said her family's clothes, furniture, beds, and laptops for school and work were a total loss after broken pipes caused flooding and the roof collapse in her rental home in northwest Houston.

"I just sat down and I started crying," Carter said. "I worked really hard to get us in this position to come from losing everything. I had my office, my car, had all of this, I was able to buy cash cards, get my children in the house and I just felt like everything was ripped right from under me. So I just sat there and I just cried. I just cried."

Carter said she was just recovering from the setback caused by the pandemic. Now, she will be out of her home for at least three weeks until the floors, ceilings, and pipes are repaired. She said she has been staying in a hotel since last week, spending the money she had left to keep her 1-year-old son and 11-year-old daughter safe and warm.

"It's like, life has to keep going in the midst of chaos," Carter said.

Carter has applied to the FEMA assistance program and received a notice that she will hear back in seven to 10 business days. She was in line to get food at a distribution this morning, while still working and homeschooling her daughter who is a gymnast. Carter set up a GoFundMe to help replace what was lost, until, potentially, financial aid comes through.

The mom of two said after watching the ERCOT briefings this week, she's worried about what her already skyrocketing electric bill will look like in the next coming months.

"When my lights were out, there were no lights on," Carter said. "To make me pay for something I did not utilize is just not fair, and to see so many families that have lost so much and to hear all of the devastation of people dying and y'all want to charge us for the destruction y'all caused? It's just not fair. It's not fair."

Monica Ware, a mother of four, has the same concerns. She said she looked at her electric bill for last week and it was $600. Her rental home was without power from Sunday to Thursday, and broken pipes also caused flooding throughout the home.

"We lost everything," Ware said. "We're having to pay to restart over. To start from nothing and we're going to pay again because they [ERCOT] lost the power?"

Ware first spoke with ABC13 on Sunday. Since then, she has set up a GoFundMe to help get clothes and food for her four children - three of whom have birthdays during this time. By next week, her children will be ages, 3 and 10 years old. She said it's important for them to continue to have a regular routine and is keeping them in school while they stay in a hotel.

SEE ALSO: Houston mother of 4 spends savings for hotel after home was destroyed

Ware said she applied for the FEMA assistance program and was notified that she was eligible for roughly $1,700 to replace the family of six's belongings. She challenged the claim and has been going back and forth with the agency and the state.

"When I asked when will I receive the money just to try to replace their stuff, [a representative with the state] said FEMA hasn't released them any money to give out to anyone," Ware said. "So, there's no time on when I will receive it."