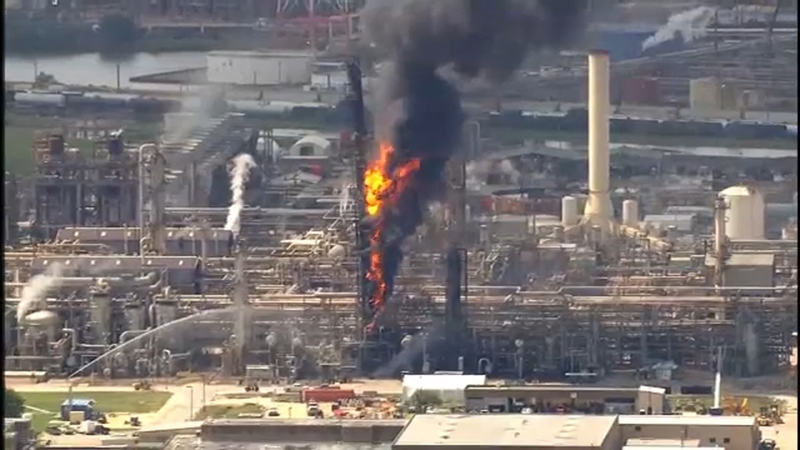 BAYTOWN, Texas (KTRK) -- A black plume of smoke filled the air in Baytown Wednesday as a fire burned for hours at the ExxonMobil Olefins plant off Highway 146 at Spur 330.

Exxon, the county and city all say they're monitoring air quality and that there are not currently any concerns.

But, the plant has raised some concerns in the past, including a lawsuit that was filed by Harris County and the state after a fire broke out earlier this year at a nearby refinery.

13 Investigates found the Olefins plant has emitted unpermitted chemicals into the air twice so far this year, according to the Texas Commission on Environmental Quality.

The Exxon refinery next door has reported another 17 incidents this year, although not all of them were due to fires.

The most severe incident was a furnace fire on March 16, which was visible for miles.

Now, Exxon is currently being sued by Harris County and the state over that fire.

The lawsuit alleges the company violated the federal Clean Air Act by emitting air contaminants, including sulfur dioxide, carbon monoxide, hydrogen sulfide and benzene into the air without authorization.

In the violation, the county says it conducted an investigation which determined the root cause of the fire was a tube leak inside the furnace, which resulted in the unauthorized emissions.

13 Investigates also looked into air monitoring available for residents near the Baytown facility.

Exxon says their monitoring inside the plant and at their fence line, or the edge of the property, did not show any concerning levels.

"(We) have seen no adverse environmental effects," said Jason Duncan, the company's Olefins plant manager, in an afternoon press conference.

As with past disasters, it took some time for the results to be available somewhere in which the public can see them.

The Texas Commission on Environmental Quality has fixed site monitors nearby.

Two of the sites measure toxic airborne chemicals. But at 2 p.m., when the fire had been burning for three hours, neither of those sites had recent information.

As of 2 p.m., the most up-to-date information was from 9 a.m., well before the fire started. Nothing was broken, but the monitors don't report data until hours after it is collected.

County teams were out within 30 minutes of the fire collecting data with handheld monitors. The data is then posted at harriscountytx.gov.

Previously, that Harris County data could lag by as long as 48 hours before it was publicly posted.

On Wednesday, the county judge's office said the lag time was about 20 minutes.

The first county data was collected at 11:34 a.m. It was posted by noon, a dramatic increase in publicly available data.

The county data does not break down specific chemicals found in the air, but does report Volatile Organic Compounds, a group made up of many of the dangerous petrochemical pollutants.

Judge Hidalgo's staff says it aims to cut the lag time even more.

Given its history of incidents, the Environmental Defense Fund released a statement Wednesday claiming the Exxon facility is "one of the worst repeat violations of clean air law."

"Yet another fire at a Houston-area chemical plant has injured workers and forced nearby residents to shelter in place for their safety. We do not have to live like this. Chemical fires and explosions, like the one Wednesday at the ExxonMobil plant in Baytown, are largely preventable," said Elena Craft, senior director of Climate and Health at the New York-based nonprofit. "Ending this madness requires the EPA, Texas Commission on Environmental Quality and local governments to invest in robust monitoring, increase inspections, and use data and technology to predict and prevent future disasters."