Most famous Arabian on the planet moves to Houston area 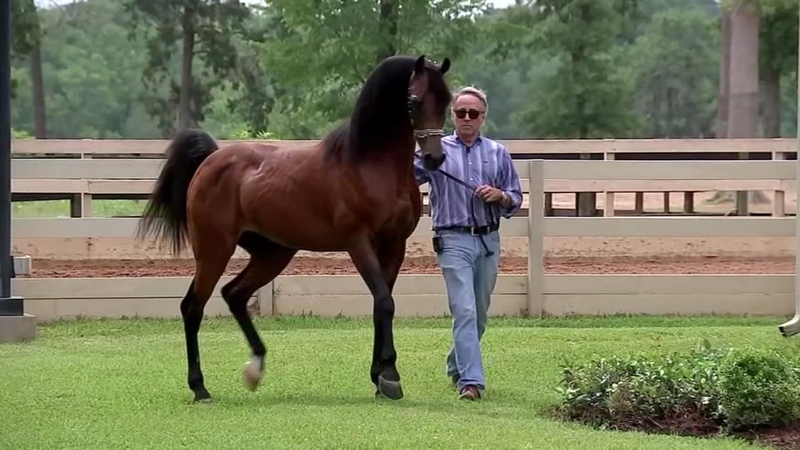 Texas is horse country. But beyond the rodeos and racetracks, there is an exclusive and expensive equestrian world thriving in our area.

And that world just exploded with news that the most famous Arabian horse in the world is now calling southeast Texas home.

To be clear -- this isn't a work horse or a race horse. These horses are world famous for their beauty.

Marwan Al Shaqab, the crown jewel of the royal stables of Qatar, has rock star status in the Middle East. Owned by the country's royal family, this exquisite stallion has dominated the show ring, become a social media super star, and literally changed the breed. And now, he's in Houston.

"I probably in one day had a thousand emails from all over the world with the excitement and especially here in America, with the excitement that Marwan had actually landed in Houston, Texas," said Michael Byatt, of Michael Byatt Arabians. "He is the most famous Arabian on the planet. He's been World Champion three times, US National Champ twice, leading sire at world championships seven years in a row, and the United States 11 years in a row."

And now, after conquering the world, Marwan is back home with Michael Byatt, the man who helped create him almost two decades ago. We made the 70 mile trip to the picturesque Michael Byatt Arabians in New Ulm to see Marwan in person. And he did not disappoint.

Long prized in the Middle East, the Arabian horse is known for its beauty and spirit. Now, wealthy clients and royal families are spending millions of dollars to build exclusive stables. And Marwan has become the breed's symbol of perfection.

"There was a group, a syndicate that offered $20 million for him and it wasn't even considered," Byatt said.

But the summers of Doha are simply too hot, so the Quatari royal family wants him spending the breeding season here. His stud fee is $20,000. But a horse this valuable would never actually be bred to a mare.

"He's bred artificially and that artificial semen can be shipping all over the world by Fedex," Byatt explained.

Marwan fathers about 50 babies a year. At 17 years old, he has a thousand children around the world, many of them champions themselves.

"I would bet if you totaled up the economic revenue he's contributed to the world, it would be in excess of a billion dollars," Byatt said.

To Michael Byatt, this royal horse deserves a life that is anything but.

An imperial horse, enjoying the simple pleasures of life in the Texas country.