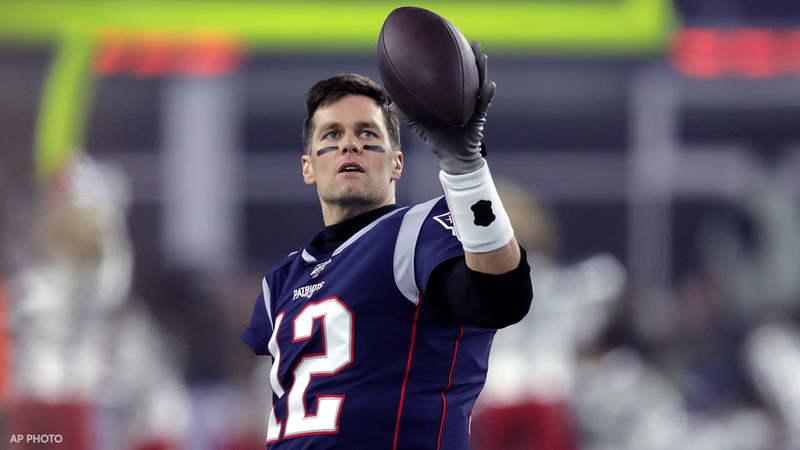 Tom Brady is expected to join the Tampa Bay Buccaneers after announcing Tuesday he is leaving the New England Patriots after two decades, NFL confirmed in a tweet.

BREAKING: Tom Brady has an agreement in principle to join the Buccaneers. The deal is roughly $30M per year. (via @Rapsheet) pic.twitter.com/sW217u2PvF

.@TomBrady, QB of the @Buccaneers. pic.twitter.com/3t0wD1HQ0l

On the news, Caesars Sportsbook moved the Patriots' odds to win the Super Bowl from 12-1 to 20-1. It's the worst Super Bowl odds the Patriots have had in the preseason since 2002, per ESPN Stats & Information.

Prior to Brady's announcement, most sportsbooks had New England with the best odds to keep the 42-year-old, six-time Super Bowl champion quarterback. With the Patriots ruled out, the Buccaneers and Chargers have seen their odds improve significantly at sportsbooks around the nation.

Tampa Bay was a -200 favorite at FanDuel, followed by the Chargers at +160. The odds on the Bucs landing Brady were increasing rapidly Tuesday afternoon.

This was the first time U.S. sportsbooks had a widespread market on where a player would play next, and bettors have been tracking news on Brady closely.
In Las Vegas, bigger bets began showing up on the Buccaneers late last week.

The SuperBook at Westgate Las Vegas took three four-figure bets on Tampa Bay on Friday and Saturday: $1,000 at 12-1, $2,000 at 7-1 and $2,500 at 4-1. The Chargers and 49ers were the only other teams that had attracted four-figure bets at the SuperBook, according to vice president of risk Jeff Sherman. With the flurry of wagers, the Bucs' odds shortened to 10-11, tied with the Patriots, before the SuperBook halted betting on the Brady market Sunday.

The Super Bowl odds at Caesars Sportsbook have been on the move with NFL free agency. The Arizona Cardinals, with the acquisition of star receiver DeAndre Hopkins, improved from 70-1 to 50-1 to win the Super Bowl, and the Buffalo Bills moved from 35-1 to 28-1 by adding receiver Stefon Diggs.

The defending champion Kansas City Chiefs remain Super Bowl favorites at 4-1, followed by the San Francisco 49ers (7-1) and Baltimore Ravens (8-1). As of Tuesday afternoon at Caesars, the Buccaneers were 30-1, and the Chargers were 45-1. Those odds would certainly improve with Brady as the starter.

Brady has had the betting market's respect for years. The Patriots were a remarkable 189-128-7 against the spread -- 58.3% -- in games Brady started, the second-best ATS record behind Joe Montana among quarterbacks with a minimum of 50 starts in the Super Bowl era.

The Patriots were favored by an average of 5.8 points in games Brady started.