Kenny Rogers remembered through the years in Houston

KTRK
By Charlie Haldeman
HOUSTON, Texas (KTRK) -- For Houston, the death of legendary singer Kenny Rogers may hit a little harder. He was born and raised here and returned home often through the years.

He was born Kenneth Donald Rogers on Aug. 21, 1938 at St. Joseph's Infirmary and was the fourth of eight children. He grew up in Houston's Fourth Ward in San Felipe Courts, which was a public housing development later replaced by Allen Parkway Village, according to his biography, 'Luck or something like it.'

"Kenny Rogers was an internationally recognized celebrity, but not everyone that's from Houston knows that he was born and raised here," nationally syndicated radio personality Rowdy Yates said.

"All of his brothers and sisters played some instrument," Rogers told Rolling Stone magazine in 2014, as reported in Saturday's edition of the New York Times. "So we used to get in the cab of a pickup truck and ride up to Apple Springs, Texas, where all my aunts and uncles would get on the front porch and play music."

Rogers' six-decade career began in 1956 while attending Houston's Jefferson Davis High School when he formed a doo-wop group called 'The Scholars', according to his website's biography. He later joined a jazz trio, The Bobby Doyle Three, where he played standup bass while he was a student at the University of Texas. Before heading to Austin, Rogers also studied at the University of Houston.

Music ran in the family beyond Kenny and his father too. Kenny's brother, Lelan, went on to become a Houston-based record producer who recorded Texas psychedelic rock band 'The 13th Floor Elevators,' among others.

While Kenny learned to play instruments early, his vocal abilities weren't noticed commercially until later. His first professional singing performance may have been at an engagement with 'The Bobby Doyle Three' at a coffee shop across the street from the old Shamrock Hilton Hotel. Childhood friend Mary Ridout told the story in Kenny's 2012 biography.

"Bobby played piano and sang but that night, Bobby had a really bad cold and, in the middle of a song, he stopped and said, 'I have punished my throat and my audience enough. We will now find out if these other guys can sing. Kenny, it's your turn.' When Kenny sang, I knew he "HAD IT," Ridout said.

Even though Rogers left Houston as a young man, he never forgot his roots or his family.

"I don't know a time when Kenny Rogers ever just showed up, even to just visit family and friends, when he didn't call the request line just to say hi," Yates remembered from his time on Houston radio stations KIKK and KILT. "I loved that about him."

Yates produced a special tribute to Rogers' musical career for radio stations across the country, including Houston's KTHT. You can listen to that tribute here.

Former Houstonian Marijane Eubanks worked with Rogers' sister in the early 1970s and remembers his generosity.

'The Gambler', as he was known, thanks to one of his biggest hits, was also put to the test on at least one trip home to perform for then-Houston Astros star Lance Berkman. Event planner Corbin Mock booked Rogers to perform for Berkman's 30th birthday at the Armadillo Palace in 2006.

"He asked Berkman to name as many hits as he could and he'd give him $100 for every one he could name," Mock said. "After Berkman rattled off 10, Kenny stopped him and sang the last one he named, which was 'Lucille.' He said he better stop him before he goes broke." 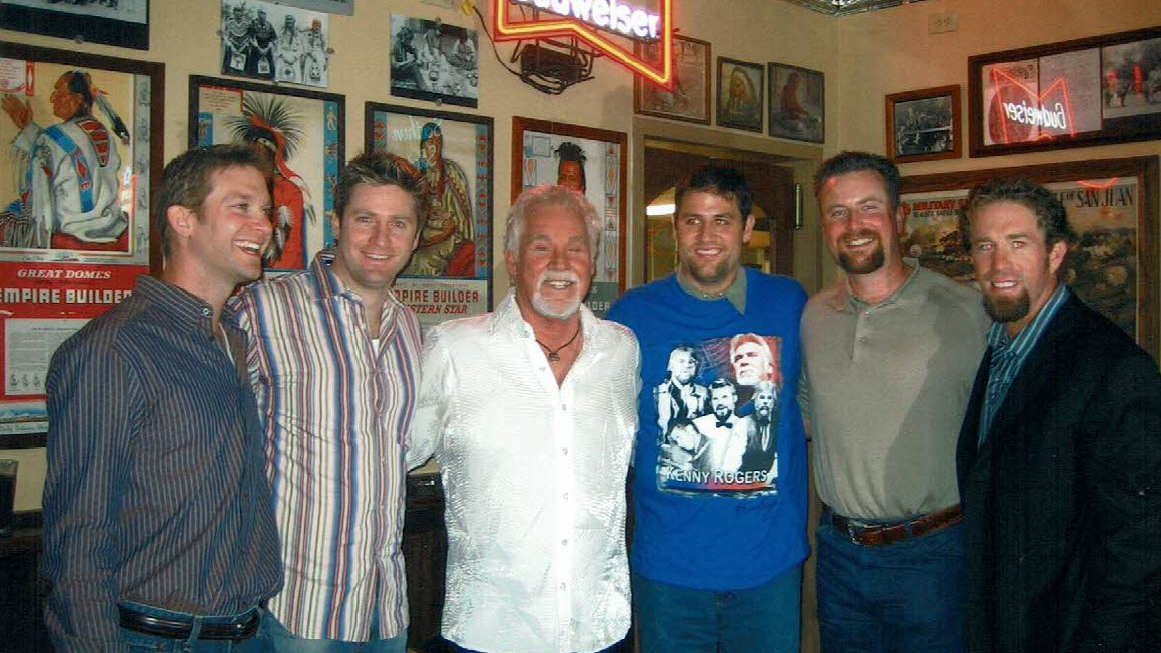 While the Armadillo Palace remains, many Houston landmarks related to Rogers are long gone. The Houston Press' Chris Gray wrote a detailed story in 2017 that looks back at six places associated with the legend, headlined 'Go Inside Kenny Rogers's Houston.'

As a performer, Kenny said farewell to Houston fans in 2017 from a stage at Stafford's Redneck Country Club. This weekend, fans and friends are saying their own farewells.

Dolly Parton, who, together with Rogers, scored a number 1 cross-over hit with 'Islands in the Stream' in 1983, shared an emotional video on her Facebook page.

"I loved Kenny with all my heart and my heart's broken," Parton said. "I think I can speak for all his family, his friends, his fans when I say 'I will always love you.'"