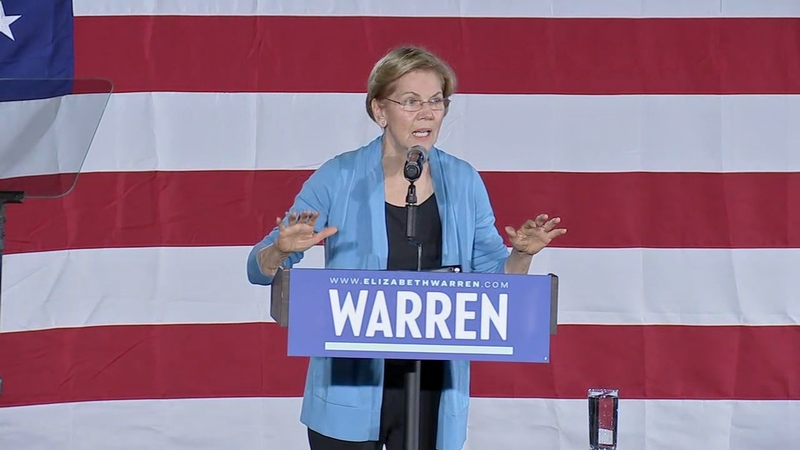 HOUSTON, Texas (KTRK) -- Democratic presidential candidate Senator Elizabeth Warren spoke to a crowd of enthusiastic supporters at Discovery Green Saturday night, in the city where she earned her college degree, and later taught at the University of Houston Law Center.

She congratulated Joe Biden for his South Carolina primary win, then made her case on why she believes she's the better choice on Super Tuesday in Texas.

Warren used much of her time in Houston to discuss coronavirus fears sweeping the United States, laying out what she thinks the U.S. government can do to help citizens during the crisis.

"It's a time for leadership and someone who believes in science," she said. Warren said she will release a plan on how to address the crisis.

The stock market has taken a historic dive from supply markets in China shutting down due to quarantines.

Warren wants the Federal Reserve to take action. "Low-cost loans to help companies get through these short term supply disruptions," she suggested.

"With fears of an economic crisis and recession rising, with fears of a global pandemic rising, Americans must ask themselves: who do you trust to actually run this country?," Warren asked. "Donald Trump has already shown he's not up to the task. So, who should the Democrats nominate?"

Watch the video above to hear more from Warren about her coronavirus plan.

Harris County Judge Lina Hidalgo made a special appearance at the town hall, standing by Warren in her fight for the nomination. Hidalgo endorsed Warren for president earlier this month.

Julian Castro, a former Housing and Urban Development secretary and presidential contender, welcomed Warren to his hometown of San Antonio. She reiterated her fight against corruption in Washington.

Eyewitness News asked the one-time University of Houston student what she would say to Texans who see her plans for big government bad for them.

"I started out today talking about our economy. We need a president who is willing to enforce the anti-trust laws and break up these giants. That's not big government. That is pro-small business. It's about competition," said Warren. "Understand this. I believe in markets but markets without rules are theft. The rules have to be enforced. There has to be a cop on the beat to make sure that everyone is playing by the same step of rules."