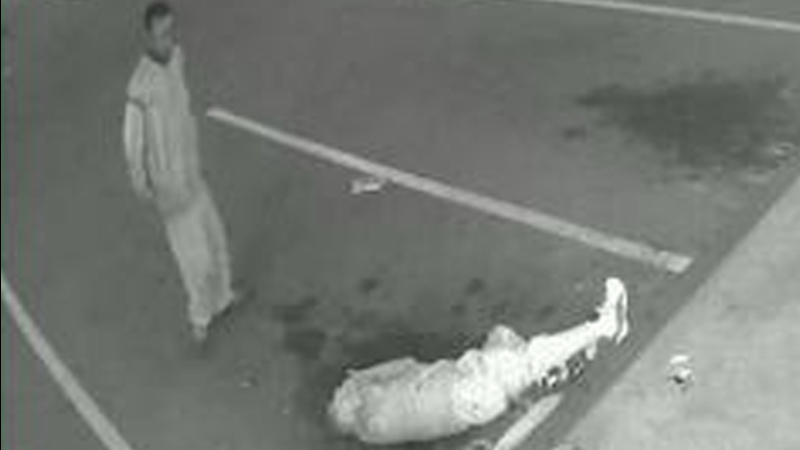 SANTA ANA, CA -- Police are working to identify and locate a suspect who attacked an 83-year-old man in Santa Ana, California, Friday morning.

The assault happened at about 6:10am in the 5000 block of West Edinger Avenue. The brutal beating was caught on surveillance video.

Tuyen Nguyen was on his daily walk to get a newspaper and coffee at a nearby restaurant when he was attacked without warning by the suspect, a transient, who he says he has seen in the parking lot before.

"He was thinking about my mom, and he was afraid he was going to die," said Pete Nguyen, the victim's son.

Married 62 years to his wife, Vy, they fled Vietnam for a better life.

Now, the elderly grandfather is hospitalized in critical condition. He suffered a brain hemorrhage and broken eye socket.

"What his motive was, whether he was intoxicated, on drugs, having mental issues, we don't know because we don't know who this individual is," said Cpl. Anthony Bertagna of the Santa Ana Police Department. "But we don't want it to happen to somebody else."

Police have stepped up patrols in the area and are asking for the public's help tracking down the suspect.

The victim's family says the disturbing video is gut wrenching, but are hoping it will help put his attacker behind bars.

"We hope that the gentleman would be apprehended," said Pete Nguyen, "We hope it will not be happening to somebody else, another family. We definitely don't want anybody else to go through what we had to go through."

The suspect was described as being between 40 and 50 years old, 5 feet 10 inches tall and weighing 160 pounds. He was unshaven and was seen wearing a gray long-sleeved shirt or black sweater.