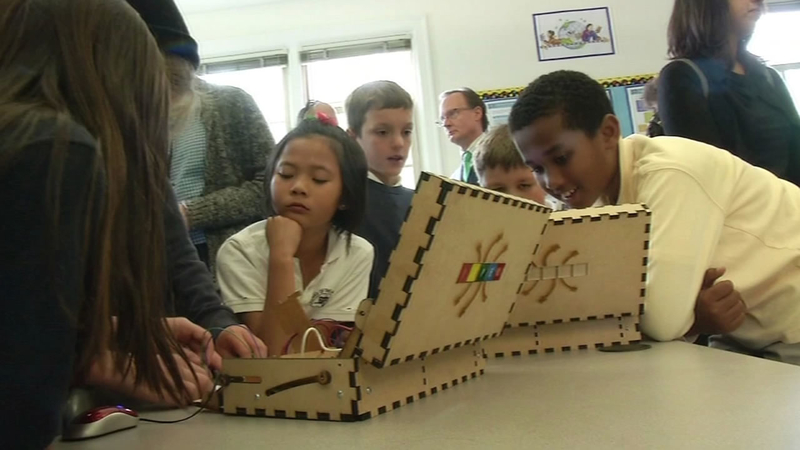 SAN FRANCISCO, CA -- As thousands of video game developers pour into San Francisco for the annual Game Developers Conference, your school-age kids may have only one game on their minds -- Minecraft. The game is a global phenomenon. And now, an educational startup is using it to help inspire the inventors and game developers of tomorrow.

What could possibly have all so many kids anxiously staring at one screen? Maybe you've heard of it. It's a game called Minecraft.

When asked what Minecraft is, School of the Madeleine Principal Ken Willers said, "I don't know if i can explain it! Actually, if we call over one of the kids, I'll let them explain it."

"Minecraft is just very addicting because you can do whatever you want," said fifth-grader Aiden Kress.

Fellow fifth-grader Walter Acevedo added, "You can build massive structures and it's pretty much, you just let your mind create."

It's a virtual world that's been taking the real world by storm. Mark Pavlyukovskyy collided with it while developing a kit to teach electronics.

"We were testing our kits all over the world," he said. "And kids were always asking us, you know, 'Can we play Minecraft on this?'"

Well, now you can.

The $150 kit is called Piper. Kids build a machine that plays Minecraft, and have to build new parts for it to complete each level.

They build the buttons and switches virtually first.

School of the Madeleine students play with Piper in Berkeley, Calif. on March 2, 2015.

Then build them in the real world and use them to control the game.

"It gets you really excited when you put all the parts together and when you're done and it's starting to load," said student Sophia Curry.

Pavlyukovskyy wanted to teach kids that the gadgets they know and love aren't that mystical after all.

Piper's creators were hoping to build a more productive way for kids to play Minecraft at home. But at least at this school, it may have found a home right here in the classroom.

"The first thing I saw was absolute engagement," Willers said. "I saw kids who immediately turned toward this box and were engaged."

At Berkeley's School of the Madeleine, Piper could become part of a tech class where they already teach kids to code.

At the launch party, kids got to video chat with Pavlyukovskyy's co-founder, Shree Bose.

"It's really a platform to get a lot of kids excited in engineering that wouldn't be otherwise," she said.

Shree's a junior at Harvard, and dreams of building a college version of Piper someday.