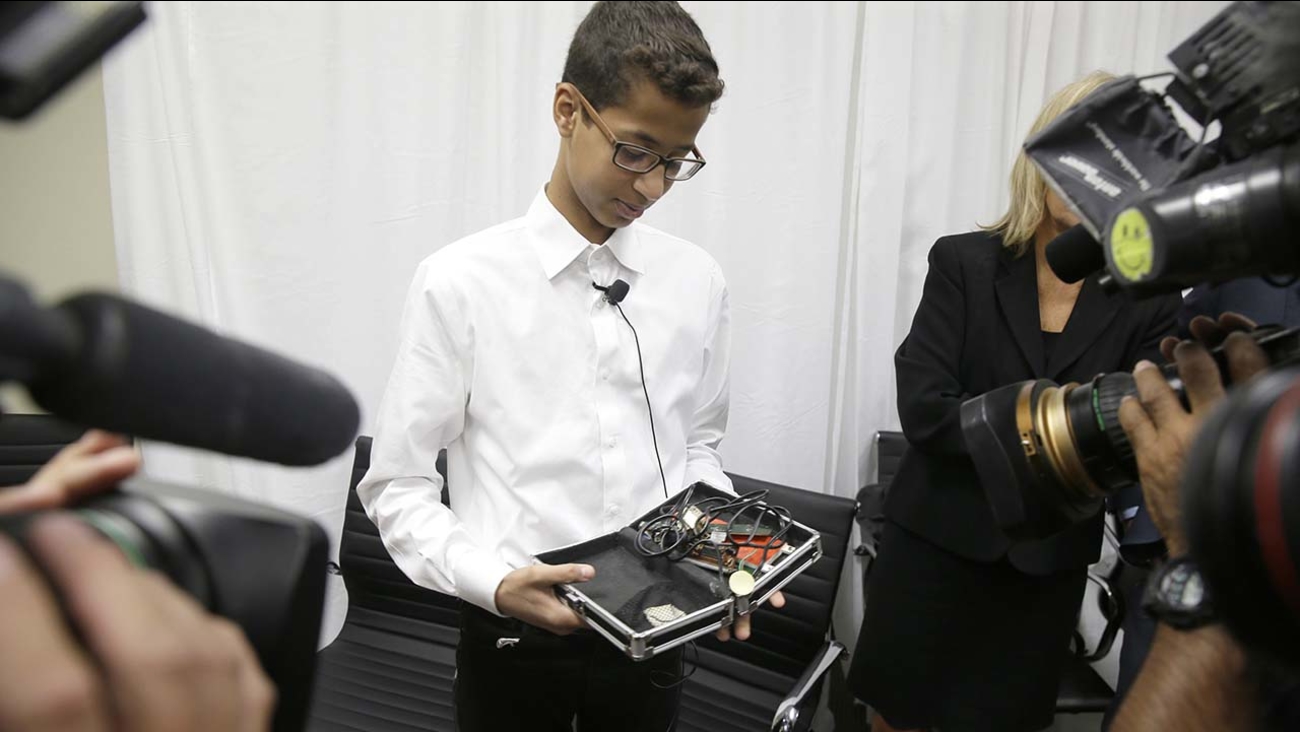 Ahmed Mohamed shows the clock he built in a school pencil box to reporters after a news conference in Dallas, Monday, Aug. 8, 2016. (AP Photo/LM Otero)

DALLAS, TX -- The family of a Muslim boy who was arrested after bringing a homemade clock to school filed a federal lawsuit Monday against Texas school officials and others, saying the incident violated the 14-year-old boy's civil rights, prompted death threats and forced them to leave the United States.

The lawsuit was filed on behalf of Ahmed Mohamed, who was arrested at his suburban Dallas high school in September and charged with having a hoax bomb. He says he brought the homemade digital clock to school to show his English teacher.

Ahmed showed off the clock, made out of a plastic pencil box and electrical wire and other hardware salvaged from his parents' garage, on Monday during a news conference with his parents and attorneys.

Irving police later dropped the charge, but he was still suspended for three days. He never returned to the school; his family opted to have him take classes elsewhere.

The lawsuit names Irving Independent School District, the city of Irving and the school's principal, and asks a jury to determine the damages. In November, the family asked the district and city to pay $15 million or else face a suit. District spokeswoman Lesley Weaver said in a statement Monday that attorneys for the district will review the suit and determine a course of action.

"Irving ISD continues to deny violating the student's rights and will respond to claims in accordance with court rules," she said, adding that school officials for now will have no further comment.

The Mohamed family questioned whether the boy was mistreated due to his religion but the district has denied the claim.

The family has since moved to Qatar, citing threats and a scholarship offered to Ahmed in the Persian Gulf country. Ahmed moved back to the U.S. last month for the summer to visit family and friends, and will do some traveling around the country, but will return to Qatar next month to start 10th grade at Qatar Academy, a private school in Doha.

"For the safety of my family, I have to go back to Qatar, because right now it's not very safe for my family or for anyone who's a minority," Ahmed said during Monday's news conference.

While in Texas, Ahmed said, he has to wear a hat, sunglasses and a hoody. "I can't walk out of the house without being covered up because I might get shot because that happens here," he said.

The teen's parents, Mohamed Elhassan Mohamed and Muna Ibrahim, have not found work yet in Qatar, so the family of eight is living in government housing and on food vouchers.

Among the claims made in the suit, which was brought by the teen's father, is that the boy's right to equal protection under the law was violated and that officers arrested him without probable cause.

Ahmed was a victim of systemic discrimination by the school district and state Board of Education that has marginalized Muslims and other minority groups, the suit claims.

"History tells us that when we have stood tall and proud for equality and freedom, we have grown as a nation," the suit says. "When we have given in to fear and hate, we flounder."

The suit adds, "In the case of Ahmed Mohamed, we have the opportunity to take a stand for equality and for justice, two things that should prevail above all else."

The Irving school district is also under investigation by the U.S. Department of Justice over an alleged pattern of discrimination against minority students.

The district in February sued the Texas Attorney General to keep the justice department's investigation private.

"When I went to the new school, they asked me, 'are you that clock kid?' I told them yeah, I was. My identity was stripped," Ahmed said.
Related topics:
educationdallasmuslimsu.s. & worldislam
Copyright © 2021 by The Associated Press. All Rights Reserved.
TOP STORIES
Driver shot on I-10 may have been road rage target, police say
Weapon that killed 5-year-old may have been found, prosecutor says
At least 3 dead, up to 99 missing in Florida building collapse
5 people living in Fort Bend Co. contract COVID delta variant
Biden, bipartisan senators have deal on infrastructure
Super steamy with a few downpours through Friday
Jill Biden to make stop in Houston as part of vaccination push
Show More
Kitten rescued after being thrown onto highway finds new home
Trae tha Truth's new ice cream shop to hire people with special needs
19-year-old suspect in Austin mass shooting arrested in Killeen
Trump supporters sued over 'Trump Train' harassing Biden bus in TX
Security camera video shows moment of Surfside building collapse
More TOP STORIES News