13 Investigates: Challenges ahead for thousands of 'uncontactable' students

"There were tears," said Borque, a teacher at Settlers Way Elementary School in Sugar Land. "I didn't understand that the children had been so afraid and worried for my health, other teachers. They were worried about each other. I had prepared this great lesson that very first day. (I) never got to the lesson. Children just wanted to talk. They wanted to cry. They wanted to laugh."

The weekday routine of waking up for school and playing with classmates during recess was disrupted after the COVID-19 pandemic forced social distancing and online learning. Borque said she knew she needed to provide some sense of normalcy for her students through daily video calls.

Last month, Fort Bend Independent School District, where Borque teaches, said 97.7 percent of its students accessed its online instruction system during the pandemic. If a student didn't log onto the system, the district said it called and emailed parents or made home visits to figure out how to better support students who weren't as engaged.

The district is still finalizing data on the exact number of students it was unable to contact during the last quarter of the 2019-20 school year. But, 13 Investigates found in the Houston area alone, thousands of students didn't show up for online learning.

The Texas Education Agency said, "school districts should be tracking the number and percentage of uncontactable students."

That information hasn't yet been gathered on a statewide scale, so 13 Investigates reached out to 20 Houston-area school districts to ask for those numbers. We found, locally, districts lost track of nearly 17,000 students amid the pandemic.

"It's one of the things that schools are really going to struggle with and have to be really thoughtful about," said Dr. Sam Brower, a clinical associate professor of Curriculum and Instruction at the University of Houston's College of Education. "What are we doing over the summer months to ensure that students that may have dropped off, students that they lost contact with, what are we doing (to support them)?"

'Safe' to return to classrooms

The Texas Education Agency announced Thursday that in-person teaching will resume when school starts back up for the 2020-21 school year.

"It will be safe for Texas public school students, teachers and staff to return to school campuses for in-person instruction this fall. But there will also be flexibility for families with health concerns so that their children can be educated remotely, if the parent chooses," Texas Education Agency Commissioner Mike Morath said in a statement.

Following the news, Fort Bend ISD Superintendent Dr. Charles Dupre said the reality is, next year is going to look different when it comes to planning student's schedules and how to safely teach them. But, he said he recognizes none of their students got a full year of learning due to the pandemic, and the district is determined to make sure it has structures in place so no one falls behind.

"We have high performing students as well as our low performing students that will be struggling for the next two or three years and our goal is to not let them get any further behind, because the further behind they get, the more likely it is they are to drop out and face challenges," Dupre said during ABC13's 'COVID-19 and Our Schools' town hall. "Their whole life can be affected by what happened during this pandemic and our job is to close that gap and help them get caught up and not lose that time permanently."

Brower said children sometimes experience summer learning loss, where they can lose up to a month and a half to three months of learning.

But since students transitioned to online learning in mid-March, it's likely more students will fall behind. From disadvantaged children who didn't have access to technology to online schools not being able to provide the same experience as classroom instruction, it could create larger learning gaps and cause many students to struggle to catch up.

"When I taught, in the first couple weeks you would want to do some reteaching to access the prior knowledge that the students learned the previous year, but now there's just going to be complete knowledge gaps, skills gaps that they never actually were able to get to because of that transition online," Brower said.

Lizette Castelline, a principal at Channelview ISD's Viola Cobb Elementary, said since the decision to go to distance learning happened while many Texas districts were in the middle of spring break, it was especially difficult because teachers and students didn't have a chance to plan a routine in person.

"We all did personal phone calls to all of our students just to make sure that they were safe and they had all the resources they needed to be successful during this whole process of distance learning," Castelline said.

Only 5 percent, or 294 students, at Channelview ISD were considered uncontactable amid the pandemic, according to the district. The district said it provided laptops, Chromebooks or iPads to students who did not have the technology to learn from home.

And whenever the district learned that a student was not participating in class, a teacher, administrator, and in some cases a constable made an at-home visit. Some students had moved. In others cases, they simply weren't completing all of the work.

"(The visits) were really positive," Castelline said. "You get to see your kids and see that they're okay and it shows them that you care, that you're there to provide them what they need, the resources that they need."

At the Houston Independent School District, Interim Superintendent Grenita Lathan said, as of April 4, the district had contacted 95 percent of its 206,000 students, meaning it hadn't heard from about 10,300 students.

Lathan said the district tried to get in contact with the remaining students, but acknowledged "there's a harsh technological divide in our city."

During a news conference on May 15, Lathan said 35 percent of students' homes don't have internet access but that the district provided thousands of hotspots and laptops to help with the digital divide.

Some students, though, relied on picking up their lessons through paper packets.

Every week, 9-year-old Aubrey Morales received a thick paper packet with her lessons for the week at Spring Branch ISD.

Although Aubrey's classmates would join video call sessions online, her family only had a cellphone and tablet to use for online learning, so Aubrey and her two sisters had to take turns.

"She would have a little booklet, like a little spiral notebook and she would work on there and she would actually take pictures and send it to her teachers through a text message to show she completed her work," Aubrey's mom, Diane Morales said. "There's like a hundred pages."

Although Aubrey missed seeing her classmates at school, things got easier once the family received a computer donation from Communities in Schools.

"It was hard (before) because I had to be on paper and use my packets, and this is better because this is a bigger screen because all I could use was a phone or a tablet," said Aubrey, who just finished up third grade. "Since the screen is bigger, there's more students that I can see."

The family got the computer just before the last week of school, but Morales said she knows there are some families who don't have the same resources.

"I can just imagine, there's probably a lot of families out there that probably couldn't even do that and they're just, they're lost," Morales said. "It's going to set them back a lot."

Spring ISD hadn't contacted 5 percent of its roughly 35,000 students during the first week of May, leaving about 1,750 students unaccounted for. The district says it made an average of two attempts weekly to reach students it hadn't heard from.

It's important to note, though, the data provided by districts on "uncontactable" students is not the same as attendance, but instead the amount of students each district heard from at least once.

Since the Texas Education Agency waived documentation of attendance while schools are considered "closed" - or offering remote learning -- not all districts are tracking student engagement daily.

At Cypress-Fairbanks ISD, "teachers and staff are contacting students weekly to check-in and provide instructional support" rather than daily attendance.

Aldine ISD said it was able to contact 96 percent of its students.

"The district's middle schools had the highest level of engagement, while the district's primary schools are an opportunity moving forward," the district said in an email to 13 Investigates.

As districts plan ahead to next year, Brower said it's especially important that there's support structures in place for economically disadvantaged students who may have fallen behind in learning.

"Students have been away from school for so long. How do you continue to support that social, emotional well-being of the child who may have had that entire support network and safety net entirely removed from them for five to six months," he said. "Those social interactions that we all kind of need, when you remove all of those from students, they can sometimes do the learning but without those relationships, there's a part of their growth and social development that becomes missing from that process."

Borque said, during her 30 years of teaching, this past semester posed challenges she hadn't faced before. About 10 of her 22 students didn't have laptops to online classes, but the district made sure everyone had the technology and food they needed to thrive.

Soon, she was able to create an environment of learning - even if it was at a distance.

"They needed something that just provided some routine," she said. "Once kids realized that at 9:30 every morning they were going to Zoom with Mrs. Borque, it was awesome."

Have a tip for Ted Oberg? A problem to solve? Get in touch with us on our tip page, or send a tip below. (On mobile? You can open our form by tapping here.)
Related topics:
educationhoustonted oberg investigateseducationhigh schoolschoolscoronavirus pandemiclearn from homecovid 19 pandemiccovid 19
Copyright © 2020 KTRK-TV. All Rights Reserved.
TED OBERG INVESTIGATES 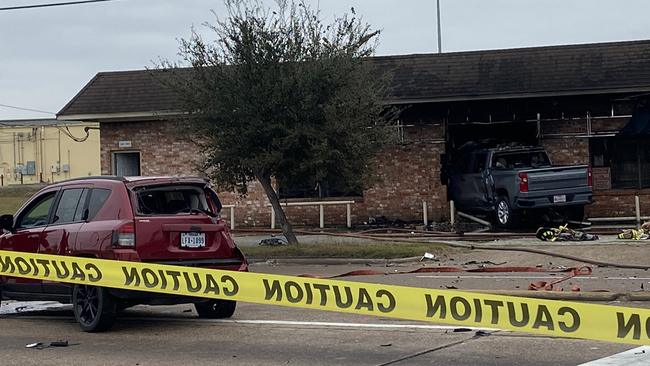