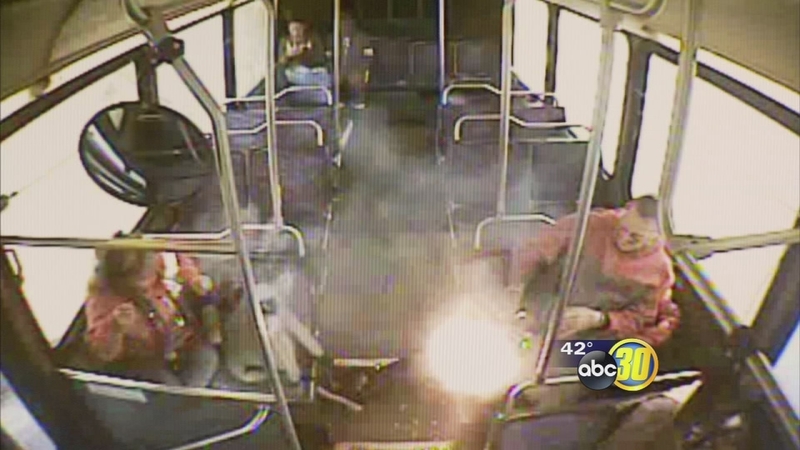 FRESNO, Calif. -- A light show ignited on a California bus Wednesday afternoon when a 53-year-old man hopped on with a vaporizer in hand.

After the bus driver gave the man a warning about smoking on the bus, he put the device in his pocket. During the next two minutes, it decides to take a life of its own.

Adam Wooddy, the owner of Satyr Vapor watched as the panicked victim beat the flames as they turned to smoke.

"Those are always so much more violent than anything you'd expect from them."

Across the country, incidents of e-cigarette explosions are being caught on tape; many times severely burning their victims. Wooddy said he believes it's mostly user error.

"Batteries have a wrap around them and if that wrap gets torn it makes the battery very unstable, especially if that battery has dings and dents-- basically a ticking time bomb."

Fresno firefighters said the battery inside this device was scorched to a char-- giving them few clues here about the cause.

The victim claimed he felt the device growing hot-- experts said that is a sign that he may have left his e-cig on in his pocket.

It's also a hazard many of users are guilty of.

"I can hear it while I'm driving, if my purse moves it might turn it on sometimes, so now I know not to do that," said Nathalie Quiros, owns e-cig.

Wooddy said newer e-cig models have safeguards that prevent your device from firing. And to avoid buying the old mechanical models that don't have a lock.

"It has a shutoff. If it fires for 10 seconds straight, it's going to stop firing and the device will turn off."

A simple function that could end up being a lifesaver